The headline of an article purporting that a “trans species man who self-identifies as a deer was accidentally shot by hunters” has resurfaced online and has been shared multiple times on Facebook and Instagram. The claim is false: the story is from a satirical website, and it is being shared on social media platforms without a disclaimer indicating that it is fictional. Additionally, the pictures are from a video on a YouTube Channel called “Humanimals”, which showcases people in body paint resembling various animals.

Beneath the headline, the first paragraph from the article reads: “A South Carolina man who self-identifies as a deer has been transported to the hospital via helicopter after being shot by two hunters.” The extract from the article was published in this Facebook post on May 25, 2021, and has been shared more than 200 times.

Two images from the article show a person wearing antlers and body paint resembling a deer.

A search online revealed that the claim also circulated in 2020 (here and here).

A reverse image search of the pictures reveals that they originated from a satirical website called World News Daily Report, which has a disclaimer warning readers that the content is “fictional”. AFP Fact Check has debunked several satirical stories originating from this website after they were shared online as authentic (see here, here and here).

A further search led to this 2018 video on a YouTube Channel called “Humanimals”, with clips of people who have had their bodies painted to resemble various animals.

According to the video’s description, the body paint was done by a British artist called Lauren Baker. Her works are displayed on this website that sells dancewear. 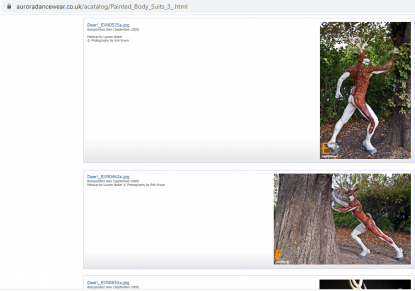 A screenshot showing "body-painted deer" on Dancewear website, taken on May 31, 2021

The photos were taken for Baker by photographer Erik Erxon in September 2009. AFP Fact Check contacted both Baker and Erxon and will update this debunk if we receive a response.