An online article said Myriam Bourla, wife of Pfizer CEO Albert Bourla, died of complications arising from a Covid-19 vaccine. The claim is false, the pharmaceutical company and the hospital mentioned in the article told AFP, and Myriam Bourla attended a public event after the article erroneously announced her death.

The Conservative Beaver, a Canadian website that AFP has repeatedly found at the center of false claims, published the article on November 10, 2021 claiming that Bourla died as a result of unspecified complications from a Covid-19 vaccine. "She passed away in the emergency room at New York-Presbyterian Lawrence Hospital after being brought in by paramedics," said the article, which was tagged as a "Beaver Exclusive." 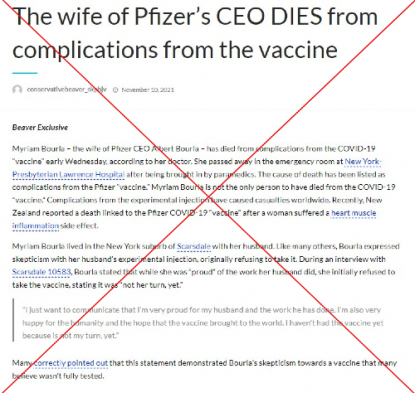 A screenshot taken on November 18, 2021 of how the Conservative Beaver article appears on Facebook

The Conservative Beaver did not respond to an AFP enquiry about the claim, sent by email on November 17. The article was not accessible the following day having been removed from the website. But screenshots of it can still be found on Facebook including here and here.

The false claim of Bourla's death follows a wave of disinformation targeting the pharmaceutical company which has developed one of the main Covid-19 vaccines.

On November 17, 2021, a Pfizer spokesperson said: "Our CEO's wife is alive and well, contrary to what was said on the Internet.

"It is unconscionable that a person posing as a journalist would spread such outrageous lies about our CEO and his family with the goal of undermining confidence in a vaccine that has been given to hundreds of millions of people worldwide."

The New York-Presbyterian Hospital, mentioned in the story, also confirmed to AFP by email that the claims in the article were false.

Myriam Bourla was seen with her husband on November 10, during an event organized by The Atlantic Council, after the website announced her alleged death. 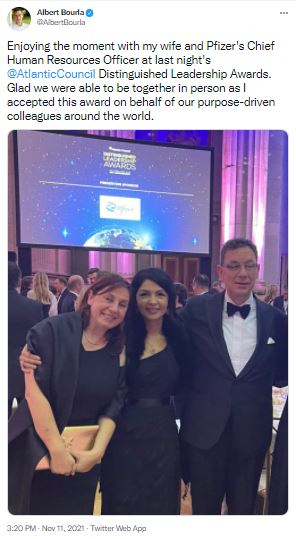 She is seen here in a photo from the event shared by Pfizer's CEO on his official Twitter account on November 11, 2021.

Nicole Meir, assistant director of media relations at the Atlantic Council, confirmed to AFP that Albert Bourla and his wife were in attendance.

More examples of debunked claims about Pfizer and its Covid-19 vaccine can be found here, here and here.