An Instagram post claims children are 50 times more likely to die from Covid-19 shots than from the virus, citing a former Pfizer researcher. This is false; the US Centers for Disease Control and Prevention (CDC) says it has not detected an unusual pattern of such deaths following Covid-19 vaccination, Pfizer says there have been no vaccine-related fatalities among children who received its shots, and a pediatrician described the risk of the disease as being far higher than that of the vaccine.

"Children are 50 times more likely to die from the COVID vaccines than by the virus itself," text in an image featured in a November 5, 2021 Instagram post says. 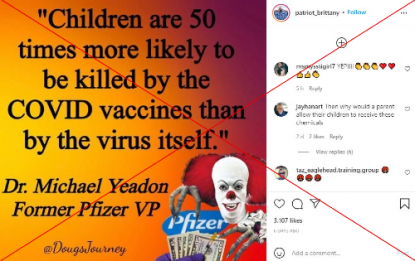 The US Food and Drug Administration authorized the Pfizer-BioNTech Covid-19 vaccine for children aged 5-11 in late October. The shot was then endorsed by the Centers for Disease Control and Prevention (CDC), clearing the way for the vaccination of up to 28 million children.

The claim in the post -- which attributes the information to former Pfizer researcher Michael Yeadon -- is part of a pattern of inaccurate information about Covid-19 vaccines. AFP previously debunked a similar claim about vaccine safety here.

Yeadon's LinkedIn profile says he left Pfizer, where he worked on allergy and respiratory research, in 2011 -- eight years before the start of the coronavirus pandemic. He has been cited in other posts spreading inaccurate information about Covid-19 vaccination.

Yeadon can be seen making the remark attributed to him in the post in a June 2021 interview with Steve Bannon, who advised former US president Donald Trump.

"It's a crazy thing, then, to vaccinate (children) with something that is actually 50 times more likely to kill them than the virus itself," he said.

Yeadon does not specify what data he used to arrive at this statistic, but goes on to say: "The number of serious adverse events reported after Covid-19 vaccines is just enormous," and cites data from the Vaccine Adverse Event Reporting System (VAERS), which is jointly run by the CDC and the Food and Drug Administration.

But a disclaimer about VAERS makes clear that the reports it contains about adverse events following vaccination are not proof that a vaccine was responsible for the problem.

"VAERS reports alone cannot be used to determine if a vaccine caused or contributed to an adverse event or illness. The reports may contain information that is incomplete, inaccurate, coincidental, or unverifiable," it says.

Asked about any deaths following vaccination, CDC spokeswoman Martha Sharan told AFP on November 8 that the agency "reviews all reports of death to VAERS."

"To date, CDC has not detected any unusual or unexpected patterns for deaths following immunization that would indicate that Covid vaccines are causing or contributing to deaths, outside of the five confirmed deaths following the Janssen vaccine," she said, referring to shots that are only authorized for use in individuals aged 18 and older.

Pfizer spokeswoman Keanna Ghazvini also said that there is "no evidence" to suggest the claim made by Yeadon is accurate. "There have been no vaccine-related deaths in children who have been immunized by the Pfizer-BioNTech Covid-19 vaccine," she said.

There have been more than 1.9 million cases of Covid-19 among five- to 11-year-olds in the United States, and more than 8,300 hospitalizations. While Covid-19 is far more deadly in older populations than in children, provisional data from the CDC shows that between January 4, 2020 and November 6, 2021, 210 children aged 0-4 and 490 children aged five-18 have died of Covid-19.

More than 2,300 young children have also suffered from MIS-C (pediatric multisystem inflammatory syndrome) as a complication of Covid-19 infection.

The CDC convened a panel of independent scientists to review the available data on the status of the outbreak in children, the effectiveness of Pfizer's vaccine, and its possible side effects.

The main concern was the risk of myocarditis, an inflammation of the heart muscle, detected in adolescents and young adults (mostly males) after vaccination with the Pfizer or Moderna shots. The rare side effect has been the subject of misinformation.

Pfizer's data did not show evidence of myocarditis/pericarditis in its clinical trial for children ages five-12.

Health authorities have confirmed 877 cases in people under 30 years of age, of which 829 required hospitalization.

Nine deaths are suspected to have been related to myocarditis following vaccination. But of six cases so far reviewed, vaccine-related myocarditis was ultimately not identified as the cause of death, pediatric cardiologist Dr Matthew Oster said in a presentation in October.

"I'm much more worried about what would happen to their child if they get Covid, for patients who don't have heart disease, than I am if they were to get this vaccine," he said.

Dr Mobeen Rathore, a pediatric infectious disease expert with the American Academy of Pediatrics, told AFP in November: "By a large margin... Covid vaccine is a much safer choice than having to get the infection."

"Covid-19 effects of infection are so much more harmful than any mild, rare side effect the vaccine may cause," Rathore said.

The expected benefits of vaccinating children include fewer school closures, and a possible reduction in transmission of the epidemic into the general population.

In the US, more than 226.6 million people have received at least one Covid-19 shot, with more than 16.5 million administered to children aged 18 and younger.