Justin Trudeau's brother was not arrested for sexual misconduct

Social media posts claim that Canadian Prime Minister Justin Trudeau's brother Alexandre was arrested in Montreal for sexual misconduct with a minor,  possession of child pornography and possession of drugs. But no such arrest has been made, according to Montreal police, and the website that stoked the claim is renowned for publishing false stories.

"The brother of Canadian prime minister Justin Trudeau was arrested on charges of sexual misconduct with a minor and possession of child pornography, among other charges," reads the caption of an August 26, 2021 Facebook post. 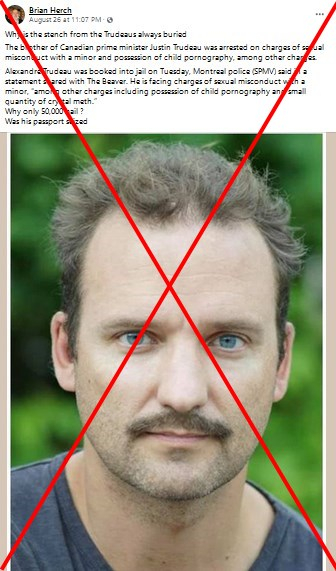 Other examples of the claim can be found here, here, here and here.

They refer to an August 25, 2021 article by the Conservative Beaver, a website known to propagate false claims. It is no longer available, but  screenshots of the false headline continue to circulate on social media. 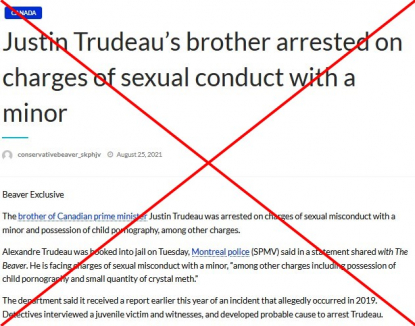 Screenshot of an archived version of an article from conservativebeaver.com, taken on August 31, 2021

According to the article -- which is presented as a "Beaver exclusive" -- the Montreal police service (SPVM) released a statement saying that Alexandre Trudeau has been arrested, detained and is "facing charges of sexual misconduct with a minor, 'among other charges including possession of child pornography and small quantity of crystal meth.'"

The claims are false, the Montreal police confirmed.

"The SPVM has no record of the individual in question," a spokeswoman for the SPVM told AFP.

Moreover, "we have never been contacted by the Conservative Beaver, which seems to have published this rumor," she added.

This is not the first time that the Conservative Beaver falsely announced the detention of a public figure. AFP Fact Check previously debunked claims that former US president Barack Obama, the Pope and the husband of Toronto public health official Eileen de Villa had been arrested.