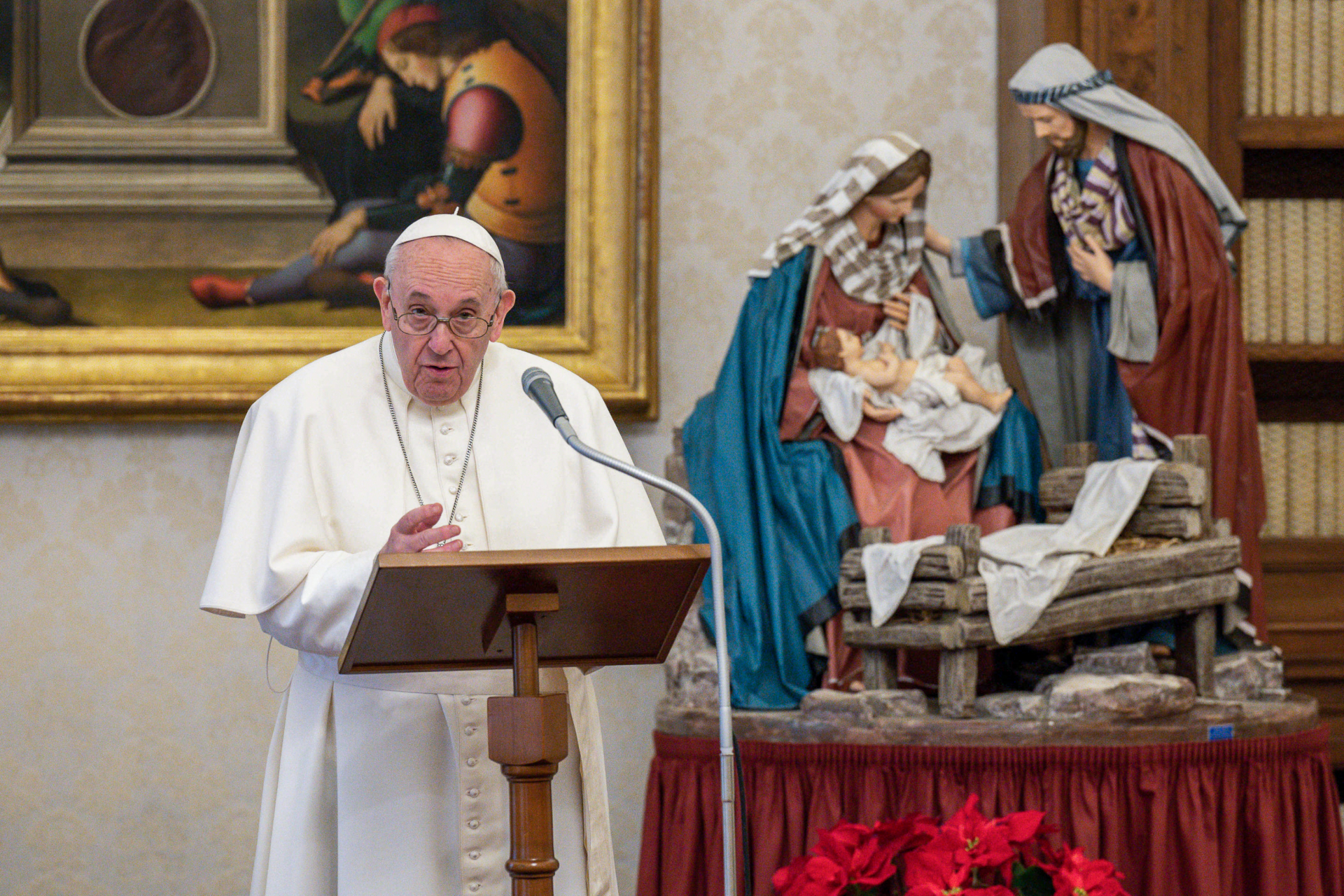 No, the Pope was not arrested for child trafficking

An article claiming that Pope Francis was arrested on January 9, 2021 has been shared tens of thousands of times on social media in multiple languages. This is false; the Pope appeared in public several times since the publication of the article, and the Vatican told AFP that activities continue as usual at the Apostolic Palace.

“Pope arrested on 80 count indictment for Child Trafficking, Fraud,” claims a January 10, 2021 article from the website Conservative Beaver that has been shared more than 28,000 times on Facebook, according to the social media analysis tool CrowdTangle. It was also shared on Twitter. 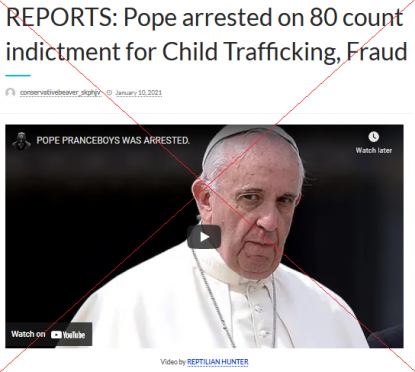 Screenshot of ConservativeBeaver.com taken on January 14, 2021

According to the article, the Pope had been arrested and faced an “80-count indictment of charges including possession of child pornography, human trafficking, incest, possession of drug paraphernalia and felony fraud.”

Following multiple articles by fact-checking organizations, including AFP (in French), the story was updated, but as of January 14, 2020, the false headline is still circulating, preceded with a label attributing it to “Reports.”

It spread through several social media accounts linked to the QAnon conspiracy, including the French site Qactus. The far-right theory has led to a surge in child-trafficking misinformation. It claims US President Donald Trump is waging a secret war against a global liberal cult of Satan-worshipping paedophile. The theory had supporters among the Trump followers who stormed the US Capitol on January 6.

In its update, Conservative Beaver said it does not promote “QAnon or other conspiracies.”

The claims about the pope, which have been shared in languages including English, French, Polish and Spanish, surfaced as the Pope announced that he would get the Covid-19 vaccine and encouraged people to do so. He was vaccinated on January 13.

The Pope spoke during a General Audience at the Vatican on January 13, according to the Vatican website. The event was livestreamed and posted on YouTube.

Contacted by AFP, the Vatican spokesman, Matteo Bruni, said that on Monday, January 11, "the Pope's activities and audiences continued as planned.”

The Vatican publishes a daily digest of Pope Francis’ activities. On January 11, he hosted Argentinian Cardinal Leonardo Sandri, as shown in this photo sent to AFP by the Vatican press office. 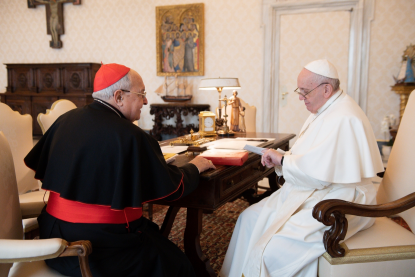 This photo, taken and released on January 11, 2021 by the Vatican press office, shows Pope Francis in a private meeting at the Vatican with Argentine Cardinal Leonardo Sandri (Vatican Media / AFP)

Content is regularly posted to the Pope’s Twitter page, which is still active and shows no mention of an arrest.

Several other points in the article are also inaccurate.

The blog quotes Giuseppe Governale, former head of the Anti-Mafia Investigation Directorate in Italy, as being involved in the case, even though he left his position in September 2020. He has been replaced by Maurizio Vallone, as indicated on the directorate’s website.

The article also claims that “The Italian National Prosecutor’s Office confirmed it ordered the arrests, and filed the charges.” Contacted by AFP, the Italian Interior Ministry said that the Vatican is a foreign state and that the ministry can’t enter.

Relations between Italy and the Vatican are governed by the Lateran Agreement, signed in 1929. This treaty confirms Vatican City as a sovereign state in the international community, and the Vatican is subject to sole authority of the Pope.

Article 4 of the text states that “The sovereignty and exclusive jurisdiction over the Vatican City, which Italy recognizes as appertaining to the Holy See, forbid any intervention therein on the part of the Italian Government, or that any authority other than that of the Holy See shall be there acknowledged.”

The Conservative Beaver article further claims that “In order to make the arrest, police and military agents had to cut off the power in the Vatican, as well as dim the live cam.”

As "proof,” some Internet users shared a screenshot of the YouTube channel of the Vatican, which permanently broadcasts images of St Peter's Square. The camera switches to the Pope's activities or Vatican events as they take place. 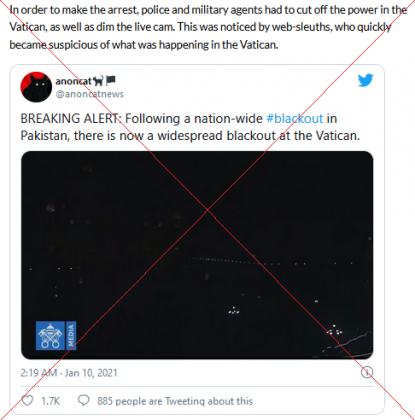 Screenshot of an archived version of the consevativebeaver.com article taken on January 14, 2020

However, dim lights are still visible, which means that the apparent darkness of the image is not due to an electrical blackout, which would cut off all of the lights and leave the frame totally black, but likely to underexposure of the image.

Taking a screenshot from the YouTube livestream of St Peter’s square and lowering the exposure with an editing software shows similar results: 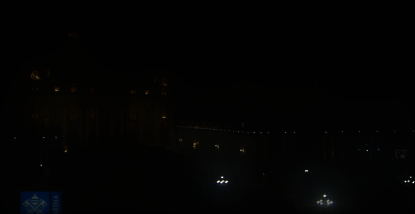 Screenshot taken on YouTube.com and digitally altered on January 14, 2020

The author of the blog “The Catholic Traveller,” who lives near the Vatican, posted a livestream on his YouTube channel, showing that there was, indeed, no blackout at the Vatican on January 10.

“I looked out my window (I can see the Vatican from my apartment) lights were on. No gunfights. No police. Cars were coming and going as usual on an early winter Sunday morning,” the author wrote.

The kickoff of the Covid-19 vaccination campaign in several countries was accompanied by the spread of false information about the vaccines on social media, some debunked by AFP Fact Check here.

This is not the first time that the Conservative Beaver website has spread disinformation: in November 2020, it falsely claimed George Soros was arrested for US election interference. In December of the same year, it claimed that Barack Obama had been arrested for espionage, which also was untrue.