Skip to main content
Hungarian-born US investor and philanthropist George Soros looks on after having delivered a speech on the sidelines of the World Economic Forum (WEF) annual meeting, on January 23, 2020 in Davos, eastern Switzerland. (AFP / Fabrice Coffrini)

An article claiming that billionaire financier George Soros was arrested for interference in the 2020 US election has received hundreds of shares and thousands of views on Twitter, Facebook and YouTube. The report includes an image of a purported indictment against Soros from the US state of Pennsylvania. The claim is false; a spokesperson for Soros’ philanthropic organisation said the report is “entirely false” and the purported indictment image was doctored.

The article, which has since been removed, was published here on a Canadian website called Conservative Beaver on November 23, 2020. 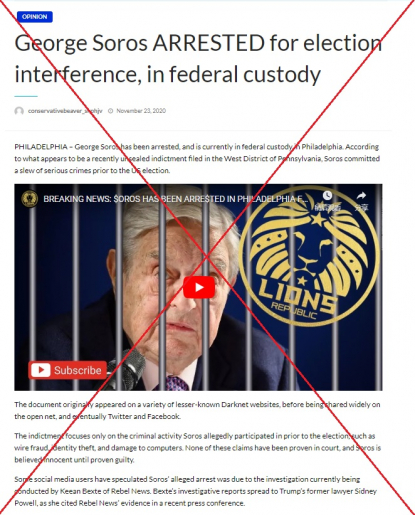 Screenshot taken on November 25, 2020, of the misleading article

The article is headlined: “George Soros ARRESTED for election interference, in federal custody”.

The first paragraph reads: “George Soros has been arrested, and is currently in federal custody in Philadelphia. According to what appears to be a recently unsealed indictment filed in the West District of Pennsylvania, Soros committed a slew of serious crimes prior to the US election.”

The article also includes a section titled “The Indictment” which reports that “Copies of the alleged indictment have been circulating online since late last night, when the arrest allegedly occurred.”

Several tweets were embedded in the section showing the purported indictment. 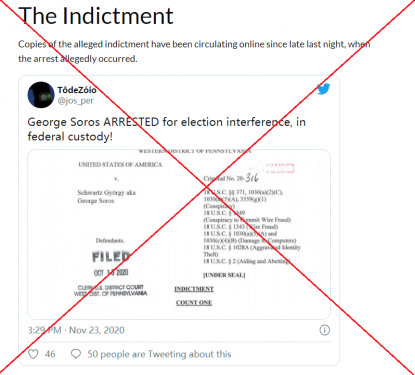 Screenshot taken on November 26, 2020, of the archived misleading article

The article has received hundreds of shares and thousands of views on social media. Posts can be seen on Twitter here, here and here, on Facebook here and on YouTube here.

The article’s claim, however, is false.

In response to the online posts, Laura Silber, a spokesperson for Soros’ philanthropic organisation Open Society Foundation, told AFP the report was "entirely false" in an email on November 25, 2020.

A keyword search also found the image of the purported indictment was doctored.

The original document, which is a federal indictment against six Russian officials for cybercrimes, can be seen on the US Department of Justice’s website here.

Below is a screenshot comparison of the indictment seen in the hoax article (L) and the original Justice Department indictment (R):

On October 19, 2020, the Justice Department released the authentic indictment in this statement, which is headlined: “Six Russian GRU Officers Charged in Connection with Worldwide Deployment of Destructive Malware and Other Disruptive Actions in Cyberspace”.

The doctored indictment was also debunked by fact-checking organisations FactCheck.org and PolitiFact.

Soros — a Hungarian-born American business and philanthropic mogul — has long been the target of right-wing and anti-Semitic conspiracy theories. AFP has debunked numerous false claims about him; for example here, here and here.