Skip to main content
A silhouetted view of the skyline in Toronto, Ontario, on July 10, 2015. (AFP / Jim Watson)

Husband of Toronto Covid response chief has not been arrested

An article suggests that the husband of Toronto public health official Eileen de Villa has been arrested, that he put “pressure” on her to enact tight restrictions against Covid-19, and that he has a conflict of interest over vaccines. The claims, based on social media posts, are false; Toronto police said there was no arrest, the health department rejected the conflict of interest allegation, and the man in question has disclosed his financial ties with drug companies.

“There are numerous social media posts” about the purported arrest of Dr Richard Choi, this updated version of the article states.

Dr Eileen de Villa is Toronto’s Medical Officer of Health in charge of the city’s response to the Covid-19 pandemic. Choi is a cardiologist in Toronto.

The article refers to various tweets, including one alleging that Choi pressured his wife, and another claiming he has “financial relationships” with vaccine manufacturers.

An earlier version, citing Diverge Media, claimed that “Richard Choi, the husband of Toronto’s top doctor, has been arrested for fraud, extortion, money laundering, and other serious offences in relation to his work at AstraZeneca. He is alleged to have been caught putting illegal ‘pressure’ on his wife to enact strict Covid policies on the people of Toronto.” 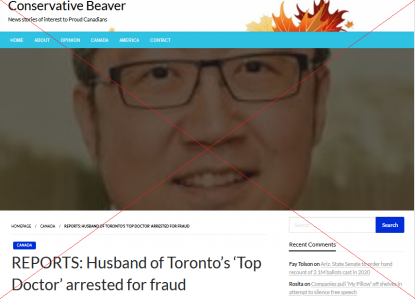 Screenshot taken from conservativebeaver.com on March 30, 2021

However, a spokeswoman for the Toronto Police Service told AFP in an email that it “is not aware of an arrest or investigation.”

Toronto Public Health said through a spokeswoman: “This story is absolutely false.”

The reports about Dr Choi's alleged conflict of interest around Covid-19 vaccines because of financial ties with AstraZeneca and Pfizer are also “false,” the spokeswoman said in an email.

On April 1, 2021 the government announced tighter restrictions province-wide against the pandemic.

Claims about Dr Choi’s links to the pharmaceutical industry began circulating in March, 2021. They refer to information from a June, 2020 panel discussion and presentation.

“This is a huge conflict of interest, with potential benefit from prolonged lockdowns,” a tweet claimed.

In a PDF document from the presentation, a slide titled “Speaker Disclosures” reads that Dr Choi has “relationships with financial interests” to pharmaceutical companies Pfizer and AstraZeneca, among others.

Screenshot taken March 30, 2021 of a slide from a PDF document on cardiovascupdate.ca

However, the slideshow of the presentation, which was about cardiology, does not in any way suggest or prove that Choi is scientifically or financially invested in the Covid-19 vaccines distributed by AstraZeneca and Pfizer.

The event, titled “Navigating Vascular Protective Strategies in High-Risk Patients During the Current Era: Practical Applications - An Expert Case‐Based Panel Discussion,” was “not at all related to Covid‐19 vaccines,” Deon Ramgoolam of EOCI Pharmacomm, the company behind the Cardiovascular Update symposium, said in an email.

He explained that “the regulations governing the Canadian pharmaceutical/life sciences industry are authored by Innovative Medicines Canada (IMC). IMC requires that physicians speaking at events sponsored by member companies must disclose any speaking fees as well as any other payments received from a member company.”

Contacted by AFP about these claims, Dr Choi, AstraZeneca, and Pfizer did not reply.

Canada has ordered or reserved more than 400 million doses of vaccine, including the AstraZeneca and Pfizer-BioNTech shots.

This is not the first time that the Conservative Beaver website falsely announced the detention of a public figure. It previously falsely claimed that Barack Obama and the Pope had been arrested.