Skip to main content
A woman distributes water and snacks at an early-voting location in Smyrna, Georgia on October 24, 2020 (AFP / Elijah Nouvelage)

No beverage loophole in Georgia restrictions on ‘gifts’ to voters

Facebook posts claim a “loophole” allows beverages other than water to be given out in Georgia, where a new law establishes specific areas in and around polling places where electioneering and gift-giving are barred. But the text of the law makes clear that the restrictions apply to all drinks, not just water -- which the office of Georgia’s secretary of state confirmed, saying that giving “gifts” to waiting voters was already illegal. 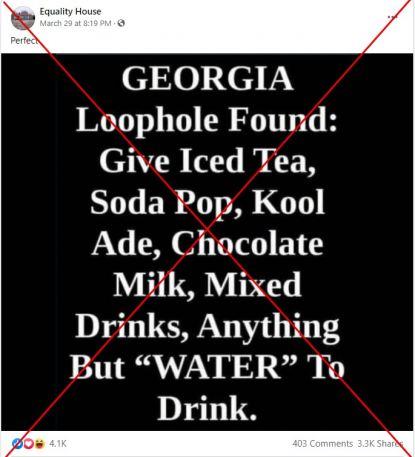 The claim also appears on Facebook here and here.

The controversial measure, which has sparked accusations of racism and voter suppression, includes a provision prohibiting the distribution of food or drink to voters in or near a polling place.

It does not contain an exception allowing voters to be given beverages other than water.

“No person shall… give, offer to give, or participate in the giving of money or gifts, including, but not limited to, food and drink, to an elector,” the law says.

The office of Secretary of State Brad Raffensperger confirmed by email that “giving drinks other than water wouldn’t be a loophole,” and said: “Giving water or any other gift or money to voters (in) line has been illegal in Georgia for years.”

The new law specifies areas in which electioneering and gift-giving cannot take place: in a polling place or within 150 feet of a building housing one, and “within 25 feet of any voter standing in line to vote at any polling place.”

There is, however, one way that voters can be provided with water: if it is given to poll workers, who then distribute it, the office said.

“That’s not a loophole, but that’s a legal way to do exactly what these people want to do,” it said.

AFP Fact Check has debunked a number of other inaccurate claims related to Georgia here.