Social media posts and an online article say pharmaceutical giant Pfizer added an ingredient used to stabilize heart attack victims to its Covid-19 vaccine for children, linking the move to reports of rare side effects from the shots. This is misleading; Pfizer's new formula containing tromethamine will be used for both children and adults, and the ingredient's purpose is to ease and prolong vaccine storage, the company and the US Food and Drug Administration (FDA) say.

"Clearly, what the myocarditis kids aren't experiencing isn't rare if they're changing the ingredients. They are clearly experimenting on us!" says a November 2, 2021 Facebook post featuring a screenshot of a tweet about the new ingredient. 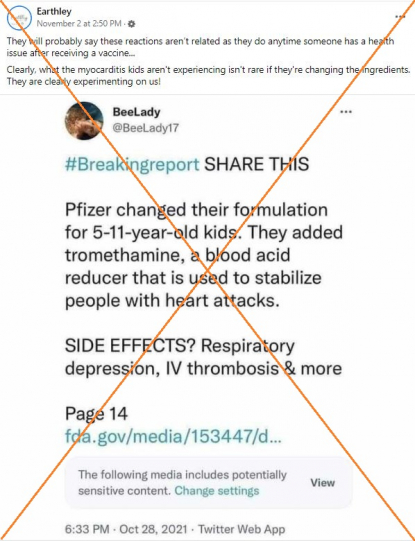 Another Facebook post made a similar claim, while an online article also referenced the formula change, saying in its headline that "Pfizer adds ingredient used to stabilize heart attack victims in vax for kids."

The article, complete with the photo of a crying child being given a shot, says there is a "disturbing nugget" that is "buried on Page 14" of a briefing document sent to the FDA -- the inclusion of tromethamine, described as "a blood acid reducer which is used to stabilize people with heart attacks."

The claim circulated online around the time that the FDA authorized Pfizer-BioNTech's Covid-19 vaccine for children aged 5-11. The shot was then endorsed by the US Centers for Disease Control and Prevention (CDC), clearing the way for the vaccination of up to 28 million children.

The focus on heart issues in the claims appears to be a reference to rare side effects of the Pfizer-BioNTech shots that have been reported to the CDC. The agency's Advisory Committee on Immunization Practices examined the cases of myocarditis, an inflammation of the heart, particularly in males aged 12-29, and concluded that the benefits of vaccination continued to outweigh the risks.

A briefing document Pfizer submitted to the FDA does mention that tromethamine will be included in the shots. It was not present in the ingredients list in Pfizer's original formula submitted to the agency (page 11 of this document).

But Pfizer spokesman Kit Longley told AFP that the addition of tromethamine is to simplify and prolong vaccine storage.

Adding a "tris buffer" such as tromethamine "allows the mRNA to resist being degraded for a longer period of time before administration -- meaning the pediatric vaccine can be stored at 2-8°C in commonly available refrigerators for up to 10 weeks," he said, a significant improvement from the previous formula's conservation requirements.

The new formula will not be limited to children, as it was also accepted by the FDA for use in individuals aged 12 and up. "This buffer (tromethamine) will also be used in the updated adult/adolescent 30mcg doses in due course, helping to ensure simplified handling of the vaccine across age groups," said Longley.

Asked why adult and adolescent doses did not initially feature the tris buffer, he said: "Our first goal in the early days of the pandemic was to get a safe, effective vaccine to people as quickly as possible. Over the past year, as vaccines have become more available, improved stability has become a higher priority for the providers administering the vaccine."

Alison Hunt, a spokeswoman for the FDA, also said that the tromethamine buffer "will provide a vaccine with an improved stability profile that can be kept refrigerated longer."

She said that the tris buffer used in the vaccine's new formula had been previously used in approved vaccines, including some against dengue fever, smallpox, and Ebola.

Asked about the link between the mRNA vaccine and heart problems, Pfizer's Longley said: "There is no evidence of vaccine-associated heart attacks."

"Pfizer is aware of rare reports of myocarditis and pericarditis, particularly in young males, following mRNA vaccination. This is a rare event in clinical and real-world evidence, and we have not seen enough cases to draw any conclusions," he said.

On its website, the CDC says: "Most patients with myocarditis or pericarditis who received care responded well to medicine and rest and felt better quickly."