Posts shared on social media in South Africa and the United States claim that an old episode of The Simpsons TV show predicted the January 2022 Covid-19 trucker protest in Canada. But the claim is false: AFP Fact Check found that the video is an edit of two different episodes made to look like the show’s producers predicted the event. 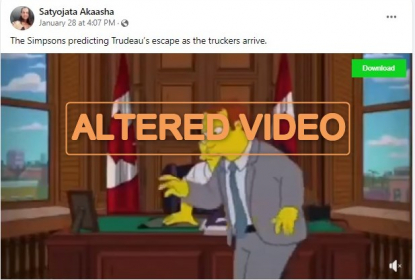 Screenshot of the post with the altered video, taken on January 31, 2022

The clip was also posted here, here, and here in the US where it has been shared thousands of times.

Hundreds of truckers in Canada protested against the country’s Covid-19 vaccine mandates required to cross the US border in January 2022, as AFP reported.

Both Canada and the US imposed mandatory vaccinations for truck drivers in mid-January 2022.

But The Simpsons did not predict the protest, dubbed “Freedom convoy”.

By conducting a reverse image search, AFP Fact Check found that the video has been digitally altered by merging scenes from two separate episodes.

The first video featuring Homer and Bart driving a truck comes from episode 17 of the show’s 10th season. In the original clip, the truck convoy is not part of any protest. The truckers are merely upset with one of the characters because he revealed their “auto-drive” secret.

The clip featuring Trudeau comes from episode 21 of the show’s 30th season dubbed “D’oh Canada”. In the original footage, Trudeau does not flee a convoy of truckers.

Rather, he meets Bart’s sister Lisa on a video call and performs various feats of strength. But he climbs out of a window and scurries down the building when Lisa asks him about a real-life political scandal.

The original audio in the Trudeau clip does not have him screaming as he exits the building.