An image has been shared multiple times in Facebook posts that claim it shows a character from The Simpsons holding a piece of paper supposedly containing a phrase that predicted the vaccine rollout in 2021. The image, however, has been digitally altered: in the original Simpsons episode, the paper has a different phrase unrelated to vaccines written on it.

It forms part of a collage that features Homer Simpson and Selma, two characters on the animated TV series The Simpsons.

"The Simpsons' ability to predict is really amazing... And the shocking thing is that the two years after the vaccine came out adds up to 666,” the Korean-language post reads in part. 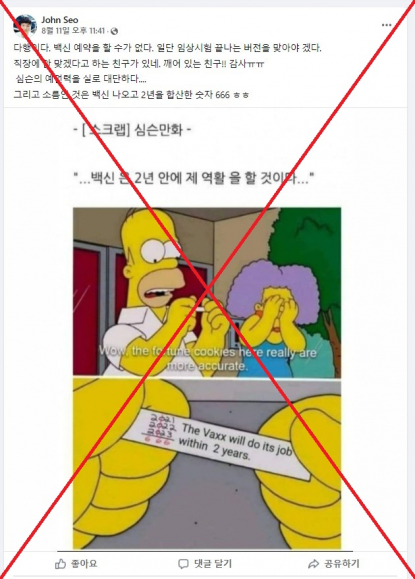 The first mass public vaccination campaigns for Covid-19 started from late 2020. By June, over two billion doses had been given worldwide, according to an AFP tally.

An identical image was also shared on Facebook here, here, here and here.

Comments on posts sharing the image, including here on the forum Daum Cafe, showed several users believed it was genuine.

"[The Simpsons' creators] are propagating their agenda through their cartoons," wrote one user.

"If you are vaccinated in 2021, they made it so that the vaccine has its effect in 2023. Oh my. Those bastards should be caught and taken off the Earth!!!" wrote another.

The image, however, has been altered to add the reference to vaccination.

Through reverse image and keyword searches on Google, AFP was able to trace the image back to Episode 12 of Season 16 of The Simpsons, titled "Goo Goo Gai Pan".

The episode concerns Selma's attempt to adopt a child in China.

An AFP journalist reviewed the episode and found that in the scene used in the altered image, the piece of paper that Homer holds up is from a fortune cookie which actually reads, "We will take Selma’s baby".

Below is a screenshot comparison between the altered image (L) and the original scene from The Simpsons (R). 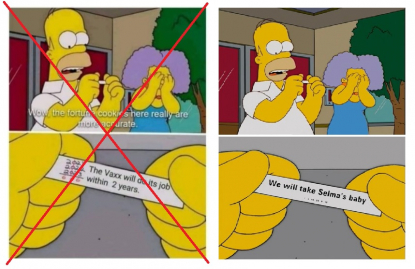 AFP could not find any references to vaccines or Covid-19 in the episode.

This review article of the episode from IGN also refers to the fortune read by Homer.

AFP has previously debunked several false claims about predictions made by The Simpsons, including here and here.