An image purporting to show a character from The Simpsons in a horned hat outside the US Capitol has been shared in social media posts that claim the animated TV series predicted the January 6 riot by supporters of President Donald Trump. The claim is misleading: the image shared in the posts has been manipulated and is not from an episode of the The Simpsons.

The image features an image Jake Angeli, a far-right rioter who was photographed by AFP inside the US Capitol with a painted face and a horned hat. Angeli was one of a number of Trump loyalists who stormed the Capitol on January 6, 2021, as AFP reported here.

Alongside Angeli’s image is a depiction of Groundskeeper Willie, a character on The Simpsons who appears to be wearing a similar outfit.

A caption on the image reads: “The Simpsons did it again …” 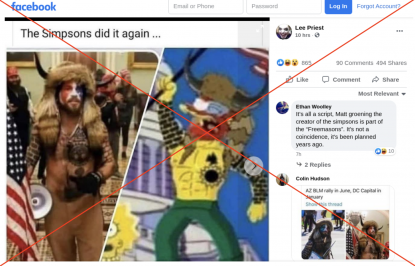 The caption is referring to pervasive online claims that the Simpsons has predicted future events, which AFP has previously debunked, for example here and here.

The misleading image of Groundskeeper Willie was also shared here, here, and here on Facebook. A similar image, featuring the Simpsons family, was shared on Twitter here and here.

A Google search for “bare chested Willie” led to this image on Fandom, an entertainment website that hosts a database for TV shows, movies and games.

The image appears on the page for Simpsons Tapped Out, a mobile game based on the TV show. “Bare Chested Willie” is an unlockable costume found on the game.

Below is a comparison of the image in the post (L) and the “Bare Chested Willie” character design found on the Fandom page (R): 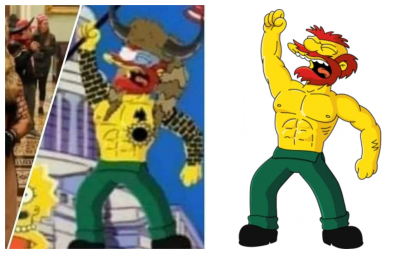 Additionally, the background image featuring the US Capitol appears to have been taken from this clip of a Simpsons episode titled “Mr. Lisa Goes To Washington.”

A separate Google reverse image search of the Simpsons family in the post led to this piece of key art used to promote the show hosted on the Fox website. The image also appears here on the Fandom page for the show.

A screenshot of The Simpsons key art on the Fandom website.