Six images have been shared hundreds of times in multiple Facebook, Twitter and Instagram posts alongside a claim they show that long-running animated series The Simpsons “predicted” the George Floyd protests. The claim is false; the images are a mix of fan artworks produced years before the protests and screenshots from the actual television series that have been presented in a misleading context.

The images were published on June 2, 2020, here on Facebook. The post has been shared more than 700 times.

The images show various scenes from the animated television series The Simpsons. They include; a burning police station; a policeman executing a chokehold on a black man; people marching with torches; a police officer being interviewed on TV; and the White House. The post’s Malaysian-language caption translates to English as: “Again the film The Simpsons predicts the future”.

The images, as well as some additional ones including one of President Donald Trump in a coffin, were shared in other Facebook posts here, here and here; on Twitter here; and Instagram here. 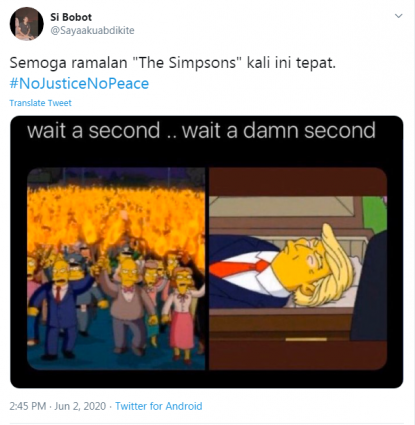 The death of 46-year-old African-American George Floyd in police custody on May 25, 2020 has sparked major protests across the US. An autopsy on June 1, 2020, found he was suffocated by a police officer, as reported by AFP here.

The first image shows a policeman executing a chokehold on a black man. The second image features the same policeman talking to a newscaster, with a screenshot of the first image displayed in the background.

The name “ALEXSANDRO PALOMBO” is superimposed on the bottom right corner of both pictures.

A reverse image search on Google found that both the images were published on December 15, 2014, in this interview with Italian artist and activist AleXsandro Palombo published by MailOnline, the website for UK tabloid The Daily Mail.

The report's first two paragraphs read: “America’s race shootings have caused months of unrest across the country - and now an artist has imagined the Simpsons joining the protests in memory of the victims.

“In a series called ‘I Can't Breathe’, Italian artist AleXsandro Palombo has turned the usually yellow cartoon family black in memory of Eric Garner, Tamir Rice, Trayvon Martin, Michael Brown and all the other victims.”

Below is a comparison between the first and second image in the misleading post (L) and the images shared by Palombo (R): Springfield is the town where the fictional characters in The Simpsons reside.

A reverse image search on Google reveals that the picture came from an actual episode from 1999, titled “Hello Gutter, Hello Fadder”. The episode 6 from season 11 does not make any reference to any protests or the Black Lives Matter movement.

In this 30-second clip uploaded to YouTube, the scene can be seen at the 14-second mark. In the scene, Homer Simpson decides to bypass some traffic by driving on a grassy area, before he is pulled over by Springfield’s police chief Clancy Wiggum. When Wiggum asks, “Alright smart guy, where’s the fire?”, Homer replies “over there” and points to the Springfield police station which is engulfed in flames. Wiggum then proceeds to attempt to issue Homer with a police summons.

Below is a screenshot comparison of the third image in the misleading post (L) and the screenshot from the “Hello Gutter, Hello Fadder” episode of The Simpsons (R):

Screenshot comparison of the third picture in the misleading post (L) and the screenshot from the “Hello Gutter, Hello Fadder” episode of The Simpsons (R)

The fourth image shows a group of people marching with torches in their hands.

A reverse image search on Google found the image came from The Simpsons Movie, which came out in 2007. In the scene, the residents of Springfield go after Homer for causing the pollution of Lake Springfield and the subsequent glass dome containment by the Environmental Protection Agency (EPA), as reported in this article from Entertainment Weekly.

The exact scene can be seen in this YouTube clip at the 9-second mark.

Below is a screenshot comparison of the fourth image in the misleading post (L) and the screenshot from The Simpsons Movie (R):

The fifth image features the White House shrouded in darkness.

A reverse image search on Google found it came from an official short animation from the show back in April 2017 to mark President Donald Trump’s first 100 days in office, which fell on April 29, 2017.

Donald Trump reviews his first 100 days in office. Watch an all-new episode of #TheSimpsons this Sunday at 8/7c on FOX. pic.twitter.com/rDtvNgusFs

Below is a screenshot comparison of the fifth image in the misleading montage post (L) and the screenshot from the animated The Simpsons short (R):

The video does not mention the George Floyd protests.

The sixth image shows Donald Trump lying in a coffin.

A reverse image search on TinEye found that the picture had previously circulated in this video posted by Mexico-based YouTube channel Badabun on February 3, 2017, crediting its origins to anonymous imageboard website 4chan.

The image appeared in this Snopes article, dated February 7, 2017, which debunked the claim that The Simpsons predicted Trump’s death.

AFP has also debunked another drawing of The Simpsons that was used to make a similar claim that the series predicted the death of George Floyd.