American conservative political activist Charlie Kirk claimed in a video viewed hundreds of thousands of times on Facebook that a medical examiner said George Floyd’s death should be ruled an overdose. This is false; the doctor, who conducted Floyd’s autopsy, testified that he stands by his assessment of the cause of death and his classification of it as a homicide.

“Breaking new video out of Minneapolis of the trial of Derek Chauvin. Medical examiner comes out and says that George Floyd’s death should be ruled an overdose,” Kirk said in the video posted on Facebook on April 12, 2021.

The video included footage of medical examiner Andrew Baker testifying on April 9 at the trial of Chauvin, a former Minneapolis police officer charged with murder over the Black man’s death. 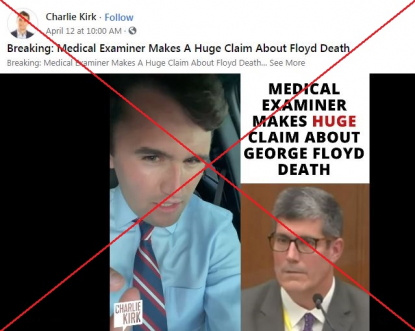 Kirk also spread the claim on YouTube and Rumble. Corrections were added to his posts on Facebook and YouTube following the publication of AFP’s fact check, while the video making the claim on Rumble is no longer available. 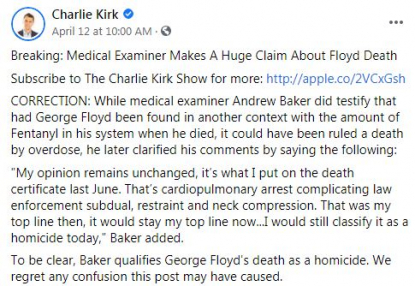 Floyd’s May 2020 death sparked nationwide protests against racism and police brutality in the United States, as well as a series of inaccurate claims posted on social media platforms.

Footage in the video showed Chauvin’s attorney Eric Nelson asking Baker if he recalled “telling the county attorney’s office that, had you found Mr Floyd under different circumstances, you would have determined this to be a fentanyl overdose?”

Baker replied: “So I don’t recall specifically what I told the county attorney, but it almost certainly went something like this: Had Mr Floyd been home alone in his locked residence with no evidence of trauma and the only autopsy finding was that fentanyl level, then yes, I would certify his death as due to fentanyl toxicity.”

But Baker subsequently made clear in remarks not included in Kirk’s video that he does not believe Floyd’s death should be ruled an overdose.

“My opinion remains unchanged, it’s what I put on the death certificate last June. That’s cardiopulmonary arrest complicating law enforcement subdual, restraint and neck compression. That was my top line then, it would stay my top line now,” he said in response to a question from prosecutor Jerry Blackwell.

“I would still classify it as a homicide today,” Baker added.

The autopsy report is available here, while the determination that Floyd’s death was a homicide is mentioned here.

The judge presiding over Chauvin’s trial denied a defense motion to acquit him on April 14 and said the jury would be sequestered following closing arguments.