Skip to main content
A wall relief of (L to R) the goddess Mut, the god Amun Ra and the 20th dynasty pharaoh Ramses III at Medinet Habu in Egypt on April 10, 2021 (AFP / Khaled Deskouki)

‘Amen’ is of Hebrew, not Egyptian, origin

Facebook posts claim the word “amen” is derived from the ancient Egyptian god Amun Ra. This is false; experts say the common ending to prayers has Hebrew origins -- not Egyptian.

“Above is a painting of Amun Ra, one of the creator gods in Egyptian mythology, decorates a tomb in Luxor, Egypt. Amun Ra often appears as a human figure with a ram's head, as he is the predecessor of Baphomet. When Christians say AMEN, they are worshiping and giving power to the opposite of what they intended, out of ignorance,” the post says. 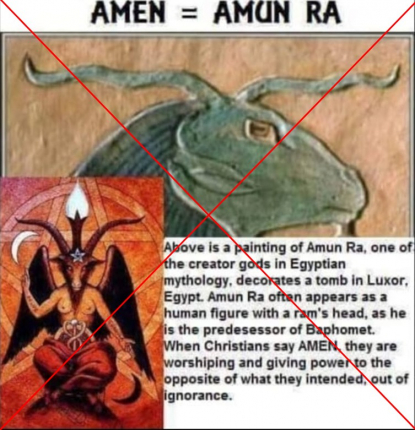 The claim also appears on Facebook here and here.

Amun is one of the most important gods of ancient Egypt, but is not related to the word “amen.”

McGowan said the similarity of the sound of “Amun” and “amen” is a coincidence.

“There is no connection with the personal name Amun or Amen, originally the name of a local Theban deity who later becomes identified with the sun god Ra.”

Jan Ziolkowski, a professor of Medieval Latin in the Department of the Classics at Harvard University, agreed about the origin of “amen.”

He said by email: “Amen entered Western languages from Church Latin, which took it from Greek, which in turn derived it from Hebrew. In Hebrew, it is a noun that means certainty or verity, related to a verb meaning to confirm.”

He explained that “the word is found in the Hebrew Bible to mark the end of prayers or professions of faith.”

And Paul Duff, a religion professor at The George Washington University, also said via email that he was “extremely skeptical” of the claim and that he had “never heard anything about (amen) being connected to Amun Ra.”

The post also claimed that the Amun Ra was the predecessor of Baphomet.

In the early 1300s, the Knight Templars were accused of worshiping Baphomet -- who later continued to be associated with the occult -- and were prosecuted for devil worship.

“The name Baphomet does not resonate with me in terms of ancient Egypt or what happened in Greco-Roman times,” Salima Ikram, professor and head of the Egyptology Unit at the American University in Cairo, said by email.

“There is a lot of esoteric ideology/iconography that is derived from ancient Egypt, generally re-interpreted and misunderstood,” she said, also noting that “some scholars think that Baphomet is an old French corruption or version of Mohammed (Mahomet), anathema to the crusaders.”

And Yale’s McGowan said that while there are depictions of Baphomet from the trials of the Templars “suggesting an animal-headed being or idol, they are not remotely close to the ram-headed version of Amun -- and not Egyptian.”