Social media posts from April 2021 claim Florida has no mask mandates or other coronavirus-related restrictions and yet is not seeing a spike in cases. This is misleading; major Florida counties still have measures aimed at curbing the spread of Covid-19 in place, though the governor has prohibited the assessment of fines for violations, and new cases of the disease have been on the rise in the state. 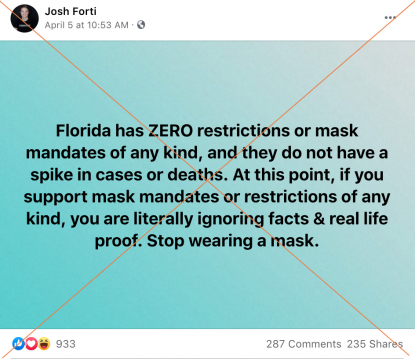 Face covering requirements and other restrictions aimed at curbing the spread of Covid-19 have sparked an intense backlash in the United States among those who view them as an inconvenience or an impingement on personal freedom, and inaccurate information about the disease has flourished online.

The claim about the situation in Florida -- which also appears on Instagram -- is inaccurate.

The two most populous counties in the state, Miami-Dade and Broward, still have various Covid-19-related measures in place.

Local governments, however, have been barred from assessing fines for noncompliance by individuals as of September 2020 and businesses as of March 2021, under executive orders from Florida Governor Ron DeSantis.

Since the beginning of the pandemic, the Republican governor -- whose state is heavily reliant on tourism -- has been eager to end coronavirus-induced restrictions. He never instituted a state-wide mask mandate, and also recently authorized a lawsuit against the Biden administration regarding cruise ship restrictions.

“It’s not correct to say that Florida has zero mask mandates. There is no state-wide mask mandate, but many counties and cities chose to enact mask mandates and most of those are still in place,” Cindy Prins, clinical associate professor of epidemiology at the University of Florida College of Public Health in Gainesville, told AFP by email.

“Other restrictions include the curfew that was put in place in Miami and only recently lifted,” she added.

“Wearing a mask, socially distancing, washing hands, & staying home when you’re sick are still the most effective ways to help prevent the spread of this virus. We can see the light at the end of the tunnel brighter than ever before -- let’s not go backward when we’ve come so far,” she wrote in a tweet.

Natalie Dean, assistant professor at the department of biostatistics at UF College of Public Health, said by email that Alachua County has “a policy for people to wear masks in businesses like the grocery stores. That has been in place for a while now.”

Saying Florida has not seen a recent increase in coronavirus cases is also inaccurate.

A Johns Hopkins University graph on the number of new confirmed cases in the state showed an upward trend from mid-March to mid-April.

The April 9 report said that the rate of deaths per 100,000 people in Florida was down 23 percent from the previous week, while the April 2 report showed it had increased 50 percent from the week before.

“Cases have been increasing in Florida,” Jason Salemi, epidemiologist and associate professor at the University of South Florida, said by email.

The professor said that the biggest increase in cases during those two weeks was among the 18-24 age group, with a 31 percent uptick, while the number of people tested remained stable.

“The increase in cases during the past two weeks obviously varies by county, but it is safe to say that, at least in the 10 most populous counties in Florida, which are large enough to have relatively stable estimates of seven-day average daily cases, the general pattern is for increasing cases in all age groups under 65 years,” Salemi said.

“Covid-19 deaths are a lagged indicator, so it is hard to assess ‘recent’ trends because we may not learn about them a while,” he said.

Prins also agreed that a reduction in cases was noticed after holidays ended, but that the trend had been reversed over the past few weeks.

“The population most affected right now by the surge in cases is the younger population, but we still have older Floridians who have not gotten vaccinated and are at risk of infection,” she said.

Rajiv Bahl, an emergency medicine physician based in the Orlando area, emphasized the importance of mask wearing and social distancing despite the vaccine rollout in the state.

“As of today, about 20 percent are fully vaccinated and just about one third of Florida’s population has at least one dose. Although this is reassuring, we need to keep increasing the number of people who are vaccinated,” he said by email.

“While some may feel that they don’t need a mask anymore or it infringes on their freedom, making choices like that and possibly passing along a virus only makes this pandemic last longer for everyone,” Bahl added.