A video of three singers performing the classic Italian song “ll Mondo” has been shared in multiple social media posts claiming they are the sons of the world-famous opera stars Andrea Bocelli, Plácido Domingo and Luciano Pavarotti. However, the claim is false; the young stars performing at the outdoor concert are Piero Barone, Gianluca Ginoble and Ignazio Boschetto of the Italian music group ll Volo. They are not the sons of  The Three Tenors.

The footage is featured in numerous social media posts, including this one on Facebook. It has been viewed more than 20,000 times since publication on April 5, 2021, according to data provided by the social network.

“The singers are the sons of Placido Domingo (with glasses), Andre Bocelli - in the middle - and Pavarotti’s son who is well built and a voice as strong as his Dad,” reads the caption on the Facebook post. “Gives me shivers just listening to them and seeing their obvious delight in harmonizing with one another.”

The video, also on YouTube, shows three singers on a circular stage at what appears to be an outdoor concert while performing the Italian song “ll Mondo”, originally sung by Jimmy Fontana. The song’s title translates to “The World” in  English.

Some social media posts claim the trio are sons of Plácido Domingo, José Carreras, and Luciano Pavarotti, a supergroup of opera legends who were known as The Three Tenors. 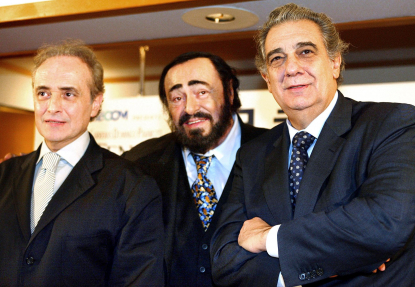 But the claim is false – there are no father-son links between the younger artists and the famous tenor trio.

The footage of this performance from September 2011 in Germany was published on Youtube on May 31, 2012, according to the video's dateline. The logo in the top left-hand corner shows the video originated from German broadcaster ZDF.

AFP Fact Check found four web links in the “About” section of the group’s YouTube page, including one that goes to their official website and biographical information for “the three components of IL VOLO”: Piero Barone, Ignazio Boschetto and Gianluca Ginoble.

Il Volo was created in 2009 after the singers individually performed in a talent show on Italian television called “Ti lascio una canto”, according to the group’s website. 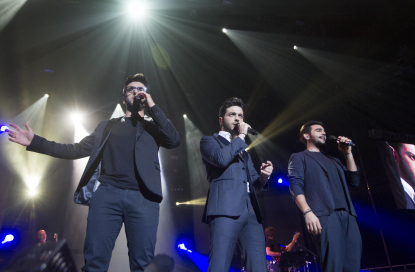 While the biography indicates that the trio did several concerts in honour of Pavarotti, Domingo and Carreras, it mentions nothing about the young singers being the sons of the three tenors.

Pavarotti died in 2007, leaving behind his four daughters. His only son died shortly after birth in 2003.

Domingo’s son, Plácido Domingo Jr, is a music composer and singer and has appeared on television with his father on several occasions.

In the case of Carreras, there are no records that indicate that his children are musicians. However, his nephew, David Giménez Carreras is a soloist.