A photo has been shared in multiple posts on Facebook along with a claim that it shows former East Timorese president Xanana Gusmao carrying an aid box in a cyclone-struck area in neighbouring Indonesia. The claim is false: the photo actually shows Xanana visiting a storm-hit area in his country. 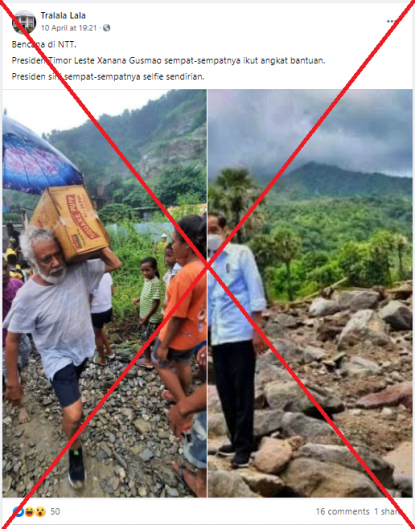 The claim also appeared on other Facebook posts, including here, here and here; and on Twitter here and here.

A reverse image search found the photo of Gusmao was previously posted here on the Facebook page belonging to East Timorese journalist Mariano Costa on April 8, 2021.

“Not only giving aid, Xanana Gusmao was also present to raise the spirit of the survivors amidst the situation after the flood.

“The disaster has affected many communities. Many have also lost their homes and possessions. The road from Manleu to Ailiu is currently unusable, while many houses have been ravaged by a landslide.”

Costa confirmed to AFP via Facebook Messenger on April 14, 2021, that he took the photo himself. “The photo was taken in Manleuana village, Dili,” on April 8, 2021, he said.

Manleuana village is located around five kilometres west of Dili, the capital of East Timor.

Below is a screenshot comparison of the photo in the misleading post (L) and the genuine photo (R):

The photo of Jokowi was published in Indonesian media reports about his visit to a storm-hit village in Lembata regency, East Nusa Tenggara province, on April 9, 2021, such as here and here.