Skip to main content
A Chicago Police officer monitors the scene after a shooting in Chicago, Illinois, on March 14, 2021 (AFP / Kamil Krzaczynski)

No evidence Chicago police tweeted ‘We are all Derek Chauvin’

Social media users posted images of an alleged tweet from the Chicago Police Department expressing support for Derek Chauvin after he was convicted of murdering George Floyd, a Black man. But the department denounced the image as a fake, and there are no traces of such a tweet on social media or in official police communications.

“We are all Derek Chauvin,” reads the text of a purported tweet from the Chicago Police Department’s official account that features a photo of the former Minneapolis policeman.

Images allegedly showing the tweet were shared tens of thousands of times, some with comments critical of the police, in the days after Chauvin’s April 20, 2021 conviction. 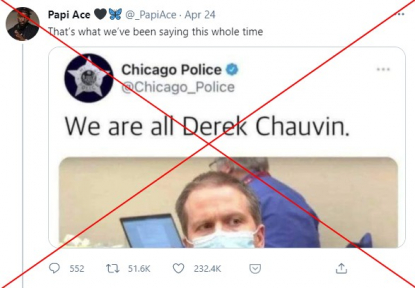 Video footage showed Chauvin kneeling on Floyd’s neck for more than nine minutes, sparking protests against racial injustice around the world, as well as a flood of inaccurate information online.

However, Chicago police say the tweet is not real.

“Not only does this synthetic and manipulated image, which is antithetical to our values, reflect the very worst of disinformation on social media, it also puts our officers & communities at risk by widening the gap in trust that we are working so hard to build,” the official Chicago Police Twitter account wrote in response on April 26, 2021.

Not only does this synthetic and manipulated image, which is antithetical to our values, reflect the very worst of disinformation on social media, it also puts our officers & communities at risk by widening the gap in trust that we are working so hard to build, bridge & restore. pic.twitter.com/2hK7ovfTM1

There is no trace of the Chauvin tweet on the department’s Twitter timeline, nor in an April 25, 2021 archive of the account, nor on its Facebook page. No news releases from the department mentioned the verdict.

Another indication that the tweet is fake is that those who shared it do not include a link to the original.

Fact-checking organization Snopes also pointed out that the font of the tweet appears to include individual letters more spaced out than normally seen on Twitter.

The first public iteration of the image found on Facebook by AFP Fact Check was posted on April 21, 2021 by John Sullivan, also known as Jayden X, a left-wing activist who was indicted on multiple counts for taking part in the storming of the US Capitol on January 6, 2021.