Skip to main content
A man in a car has his temperature taken at a checkpoint set up to examine people in a bid to halt the spread of the Covid-19 coronavirus in the southern Thai province of Narathiwat on December 29, 2020. (AFP / Madaree Tohlala)

Social media posts shared tens of thousands of times claim that Thailand is the only country in the world that requires people to wear a mask when travelling in a private vehicle. The claim is false: while Thailand did mandate face coverings in all public places -- including private cars -- from April 26, 2021, it is not the only place that has introduced this kind of regulation during the pandemic. In Asia, India, Indonesia and the Philippines have also imposed mask mandates for personal vehicles, as have European countries, including Germany and Spain, in some situations.

The post’s lengthy Thai-language caption translates to English in part as: “NEWS: Do you know that there aren’t any other countries that enforce mask-wearing mandates in 'private cars'?"

The lengthy post criticises the fact that the Thai regulation does not exempt members of the same household travelling together in a private vehicle from having to wear a mask.

"When people in the same family are in a closed space, such as a private car, it is normal not to wear a mask because it 'won't help' because when they come home, they would take it off anyway.” 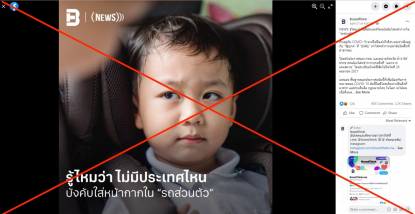 The posts began circulating after wearing masks became compulsory in public spaces in Bangkok and 47 other provinces, as AFP has reported.

Anyone travelling in a vehicle that is carrying more than one person in Bangkok must wear a mask, according to this Thai government regulation issued April 26.

“Wearing masks is compulsory in all vehicles when there are other people, even within the same household. You do not have to wear a mask if you are alone," the regulation says.

The misleading posts feature a photo of a boy sitting in a car. The Thai-language text on the image says: “Do you know that there aren’t any countries that enforce mask-wearing mandates in a 'private car'".

But the claim is false: multiple other countries require masks be worn inside private vehicles, including with members of the same household.

In the Philippines, “all drivers and passengers of private and government vehicles must wear face masks at all times," according to this May 2020 memo from the Philippines’s Department of Transportation.

A joint statement with the Department of Health released on February 5, 2021 specified that masks were mandatory if the driver was not alone in the vehicle, “regardless if they are from the same household”.

In India, Delhi announced on April 8, 2020 that: “any person moving around in his personal and official vehicle must be wearing these masks compulsorily.”

The Union Health Ministry clarified that it is not compulsory to wear a mask if travelling alone in a car, but police can impose a fine if the car has more than one person and masks are not worn by all, according to the report by The Print on September 4, 2020.

In Indonesia, the capital Jakarta issued this regulation on November 12, 2020, requiring “anybody who is in the area of Jakarta” to wear a face mask at any time while out of their house.

The Jakarta Post has reported that this means people must wear masks at all times including when travelling in “private vehicles”.

In Spain, wearing a mask is compulsory when travelling in a car if there are two people who don't live together in the vehicle.

A statement published on March 29, 2021 which came into effect a day later, states that: "it is mandatory for people aged 6 or older to use masks in public and private transport... including the driver if the people travelling in it do not live in the same home.”

And in some areas of Germany, including Berlin, mask wearing has been required in private vehicles at points during the pandemic, if the passengers do not all belong to the same household.