This video shows shoppers at an Indonesian market during Ramadan 2021

A video has been viewed tens of thousands of times after it was shared on Facebook and Twitter alongside a claim that it shows crowds of shoppers at a mall in Kuala Lumpur, Malaysia, during the Islamic holy month of Ramadan this year. The claim is false; while the video was filmed during Ramadan 2021, it shows shoppers at a market in the Indonesian capital Jakarta, not in Malaysia.

The post’s caption, written in simplified Chinese characters, English and Malaysian, reads: “Kuala Lumpur Pertama Complex and Sogo Mall Malays [at the] shopping mall to buy Eid goods now [Panic] AS RECEIVED
Where Is the Sop”.

Pertama Complex and Sogo are shopping malls in Kuala Lumpur, the biggest city in Malaysia. 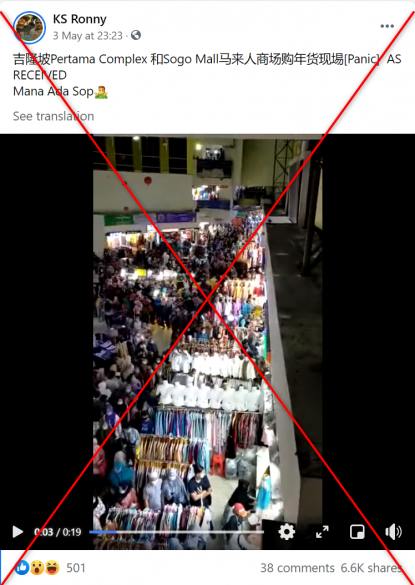 A reverse image search on Yandex, followed by keyword searches on Google, found a longer video report published on May 2, 2021 by Indonesian news site Liputan6.com.

The caption reads: “Wholesale Market Tanah Abang, Central Jakarta, was still full of people who went shopping ahead of Eid al-Fitr on Sunday afternoon, May 2, 2021. Crowds of people were shopping without social distancing.”

Tanah Abang Market is in the Indonesian capital, Jakarta.

Below is a screenshot comparison between the video from the misleading Facebook post (L) and the Liputan6.com report (R):

The crowd at Tanah Abang Market was also reported by CNN Indonesia here. The video, posted on the broadcaster’s YouTube channel on May 3, 2021, shows the same scenes as the one in the misleading post, starting from the 60-second mark onwards.

In response to the crowd at Tanah Abang Market, the Jakarta provincial government said they would be implementing crowd control to prevent new clusters of Covid-19 cases.