An Instagram video with more than 600,000 views claims pandemics recur like clockwork once a century. This is false; the clip has incorrectly dated some of the widespread infectious disease outbreaks, and medical historians say it ignores many others while including a localized epidemic from France. 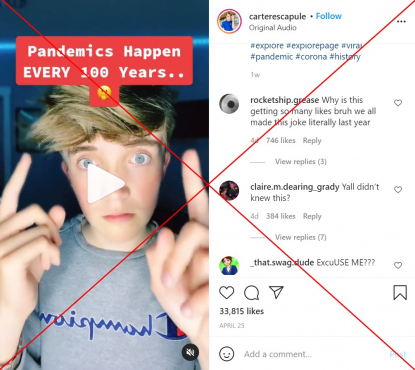 The novel coronavirus was first detected in the Chinese city of Wuhan in late December 2019. Since then, the virus has claimed more than three millions lives worldwide, its severity accompanied by an outbreak of misinformation online.

In March 2020, AFP debunked an infographic which spread alongside a very similar claim, about the coronavirus fitting a pattern of viral outbreaks every 100 years.

For that fact check, a WHO spokesperson told AFP that while “epidemics for certain diseases are cyclical,” the ongoing Covid-19 pandemic “is unpredictable, and that’s because the disease is new.”

Elizabeth O’Brien, Assistant Professor of the History of Medicine at Johns Hopkins University, said there is no basis to the claim.

“No, it is not true that pandemics happen every 100 years,” she told AFP.

“Stating so would fall into determinism and would ignore many other notable pandemics,” including cholera in the 19th Century “as well as the 1957-1958 influenza pandemic (H2N2 virus), and the 2009 H1N1 influenza pandemic.”

Dr Scott Podolsky, Professor of Global Health and Social Medicine at Harvard Medical School, told AFP: “This seems a facile attempt to impose an order/predictability/precise periodicity on such processes.”

The claim incorrectly dated two of the pandemics it referred to.

Podolsky, who is also director of the Center for the History of Medicine, Countway Medical Library, confirmed that the Spanish flu started in 1918, not 1920.

The US Centers for Disease Control and Prevention (CDC) describes Spanish flu as the worst pandemic in recent history, infecting an estimated one-third of the world’s population, and says outbreaks of flu-like illness in the US were first detected in March 1918. It continued into 1919.

The video’s mention of cholera in 1820 appears to refer to an outbreak believed to have originated in Jessore, India, in 1817. It then quickly spread throughout India, into what is now Myanmar and Sri Lanka before reaching Thailand and Indonesia in 1820. It subsequently spread beyond Asia.

The video also miscategorizes one of the outbreaks. “(It) calls the 1720 ‘great plague’ a pandemic when it wasn't (because) it was localized in France,” said Podolsky.

“An epidemic is generally regional (community, nation, etc), while a pandemic spreads across multiple regions.”

The Great Plague in the port of Marseille killed nearly half the city’s population.

Experts forecast that the factors leading to widespread outbreaks of disease will intensify, however “it’s very hard to predict particular pandemics or viral outbreaks, let alone their timing,” said Podolsky.

AFP has also debunked false and misleading claims about the Spanish flu.