A photo of a child paying respect at a memorial service has been shared thousands of times on Facebook, Twitter and Instagram alongside a claim that the child is the daughter of an Indian soldier killed in a deadly clash between Indian and Chinese troops on the Himalayan frontier in mid-June 2020. This claim is false; the memorial organiser confirms that the child is not related to the late soldier, but rather, the sister of one of its staff. 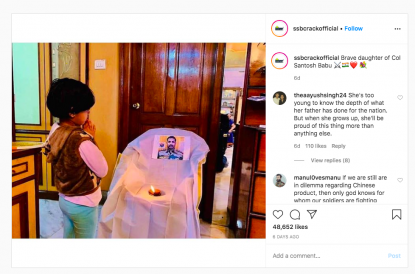 Colonel Bikumalla Santosh Babu was one of the 20 Indian soldiers who were killed in violent border clashes with Chinese troops on June 15, according to the Indian army. The confrontation marked the first deadly incident in a long-running border dispute between the two countries in decades, AFP reported here.

However, the claim about the photo showing Babu’s daughter is false.

A reverse image search on Google found the same photo published on Twitter here by Akhil Bharatiya Vidyarthi Parishad (ABVP), a right-wing student organisation. ABVP organised a memorial for Babu near the city of Bengaluru on June 16.

The June 16 tweet from ABVP reads: “Lets pay our homage to Col Santosh Babu, Commanding Officer of 16 Bihar Regiment martyred today in retaliation with china. Tributes by lighting the lamp for the martyred soul by Bengaluru Rural group.” 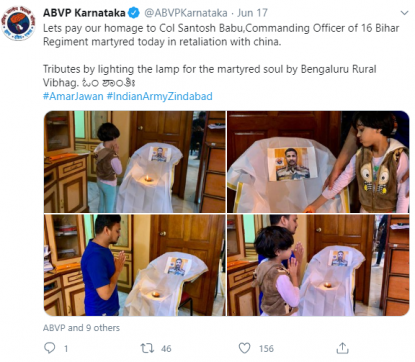 On June 17, ABVP posted another tweet that stated the girl is the sister of an ABVP employee. 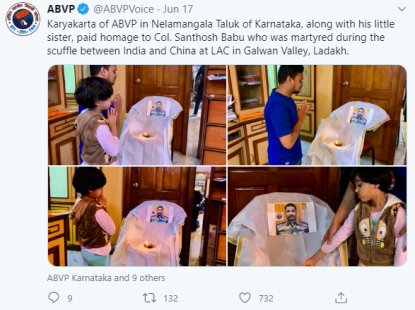 Sunil Bhat, ABVP’s co-convenor of social media, also denied that the girl is the daughter of the late soldier.

“This girl is not the daughter of the martyred soldier, her name is Ms. Manashri and she is a sister of one of our organisation workers. This photo is from an event that was held in Nelamangala administrative district, near Bengaluru,” Bhat told AFP by phone on June 22, 2020.

Babu's cremation and official funeral procession took place on June 18 in his hometown Suryapet, a city in the southern state of Telangana, according to ANI news agency.