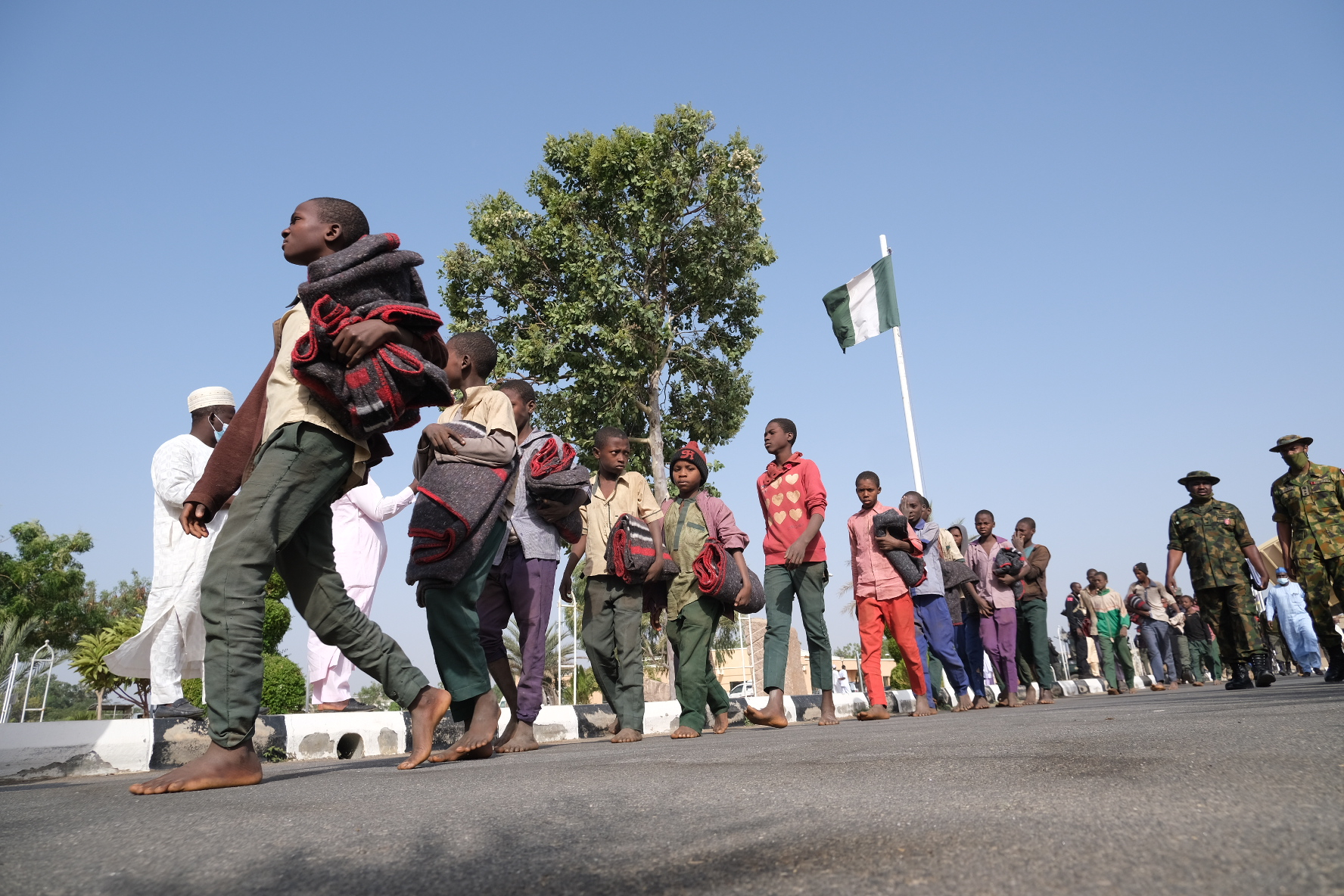 The EU has dismissed as false a statement praising Nigeria's president for the rescue of schoolboys kidnapped in December 2020 and seen here on the day of their release (Photo: Kola SULAIMON/ AFP)

After Nigeria secured the release of hundreds of schoolboys abducted by Boko Haram in December 2020, the president’s aide tweeted a quote from an alleged statement by “the EU Human Rights Forum” praising the government's swift rescue response. The story was widely covered by leading Nigerian media which reported that the EU had issued the statement.  However, AFP Fact Check has found no public trace of an EU-linked organisation or the spokesman quoted in the statement. The European Commission also confirmed that neither existed.

Nigeria is battling a decade-long Boko Haram insurgency, which has seen the abduction of hundreds of children across the country's north.

After their release, Bashir Ahmad, the personal aide of President Muhammadu Buhari, posted the following statement on his Twitter account on December 20, 2020:

“‘We commend President Buhari for the swiftness and efficiency with which the lads were rescued from their abductors. Such swiftness would have made all the difference had such occurred in 2014 when schoolgirls were similarly abducted from their school’ - the EU Human Rights Forum.” 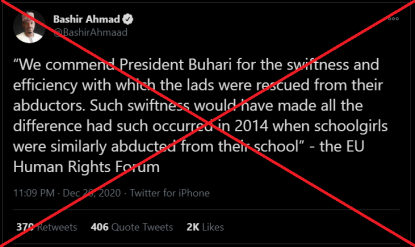 The tweet has been shared more than 750 times since its publication.

A Google search revealed that the quote came from a statement mentioned in online news reports by leading Nigerian media organisations including Leadership, The Sun, The Independent, The Nation, New Telegraph, Legit NG, and Channels TV.

All angled the story on the EU hailing Buhari's rescue efforts.

The statement also accuses his predecessor, Goodluck Jonathan, of complacency over the 2014 kidnapping of 276 schoolgirls in Chibok. Some 112 girls still remain missing.

The quotes were attributed to Joseph Cullen, identified as a “special rapporteur, Lake Chad/West Africa” for the European Union Human Rights Forum.

While most of the websites ran the story on December 20 -- the same day as Ahmad’s tweet was posted -- AFP Fact Check found that Nigerian daily newspaper Vanguard published a version a day earlier, with no byline. 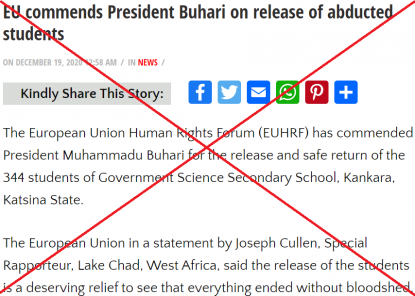 AFP Fact Check has contacted Vanguard to enquire how it obtained the statement but is yet to get a response.

Meanwhile, the Guardian Newspaper removed the story from its website after doubts emerged over the sourcing, its online editor Tonye Bakare said.

"Publishing a story that has a dubious origin does no media organisation that values its name and prioritises accuracy of its content any good. So it is important to act fast when there are doubts about a story," he told AFP Fact Check.

The European Commission, the EU’s executive body, has dismissed the claim as false.

“This was misinformation and no such organisation or person exists,” Commission spokesman Peter Stano told AFP Fact Check. 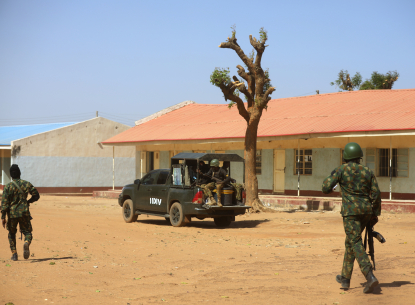 Searches for “Joseph Cullen” and “EUHRF” on Google and social media monitoring tool CrowdTangle only return a small number of Nigeria results all from December 20, 2020.

A separate search for the “European Union Human Rights Forum” revealed this 2010 statement on the website of the Belgian government. 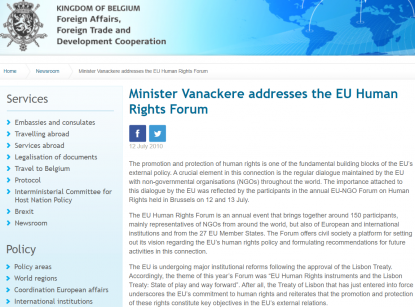 Screenshot taken on January 8, 2021, showing the statement on the Belgian government's website

“The EU Human Rights Forum is an annual event that brings together around 150 participants, mainly representatives of NGOs from around the world, but also of European and international institutions and from the 27 EU Member States,” the publication partly reads. The forum was last held between December 9 -10, 2020 --  a day before the abduction of the schoolboys.

Again, there is no evidence of anyone called Joseph Cullen in relation to the event.

AFP Fact Check further found that “the European Union Human Rights Forum” is not among the EU's fourteen institutions.

In response, the presidential aide posted a tweet saying he got the story from Channels TV.

AFP Fact Check has contacted Ahmad for comment but is yet to receive a reply.

Meanwhile, Channels TV has corrected its story following AFP Fact Check’s revelation, acknowledging that there is no relationship between the EU and the forum. The Leadership Newspaper also removed the publication from its website.

Our investigation showed the United Nations released a  statement on December 18, 2020, commending Nigeria's "swift action" in the rescue of the kidnapped children.