A video has been viewed thousands of times on Facebook and Instagram alongside a claim that it shows a health official who died at a press conference where Denmark announced it would suspend AstraZeneca Covid-19 vaccinations. The claim is false: the head of the Danish Medicines Agency Tanja Erichsen later tweeted that she had recovered.

“Denmark bans AstraZeneca vaccine / while the announcement is ongoing / one of the government officials fainted and died,” the Indonesian-language text superimposed on the clip reads.

The post's caption reads, “Denmark. One of the Danish government officials collapsed instantly and reportedly died during the announcement to ban the use of AstraZeneca's Vaccine.”

“The exact cause of her death remains unknown.” 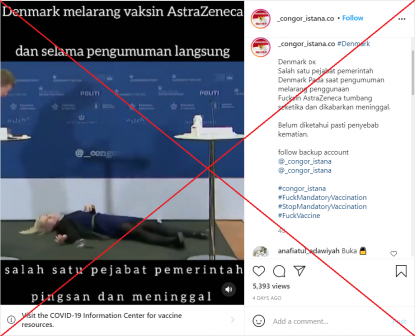 On April 14, 2021, Denmark announced it would stop using the AstraZeneca Covid-19 vaccine altogether, becoming the first European country to do after reports of rare but serious blood clots among those who had received the jab.

The Nordic country said it would continue its immunisation campaign using the Pfizer/BioNTech and Moderna vaccines following two cases of thrombosis, one of them fatal, in people who had received the AstraZeneca jab.

The same clip and screenshot was posted here and here on Facebook alongside a similar claim.

Keyword searches found that the official in the misleading clip was  Tanja Erichsen, the head of the Danish Medicines Agency.

A longer video was posted by TRT World here on YouTube on April 15, 2021, headlined: “Denmark official faints during Covid-19 conference.”

The video’s caption reads: “The head of the Danish Medicines Agency, Tanja Erichsen, fainted during a press conference on live TV over the country’s decision to stop using the AstraZeneca vaccine.

“The agency later announced that she was taken to the hospital as a precaution and has since recovered.”

Below is a screenshot comparison between the misleading clip (L) and TRT World’s video (R):

The Danish Medicines Agency tweeted on April 14 that Erichsen had fainted during the press conference but later recovered.

On April 19, 2021, Erichsen tweeted a picture of herself and said she was doing well.

“Thank you all very much for caring and your messages – it warms my heart. It was a hard blow to my head, but I have mostly recovered now. The large amount of support I have received both here on Twitter and other platforms has meant a lot to me. A HUGE thanks,” she said in the Danish-language tweet.

While the tweet was posted by Erichsen and shows her photo, the account was taken over in August 2021 by her successor, Line Michan, and now shows Michan’s name.