A purported news article has been shared multiple times on Facebook that states South Park co-creator Trey Parker has "stepped down" from playing the role of “Mr. Hankey, the Christmas poo” following a race row. But the claim was originally shared as satire: the report was doctored from an article published by US broadcaster CNN, who confirmed to AFP that the purported South Park article had been manipulated. As of April 22, 2021, there have been no credible reports that Parker stepped down from the role.

“Trey Parker will no longer voice Mr Hankey the Christmas poo on ‘Southpark’,” reads the screenshot of a purported CNN headline in the post. 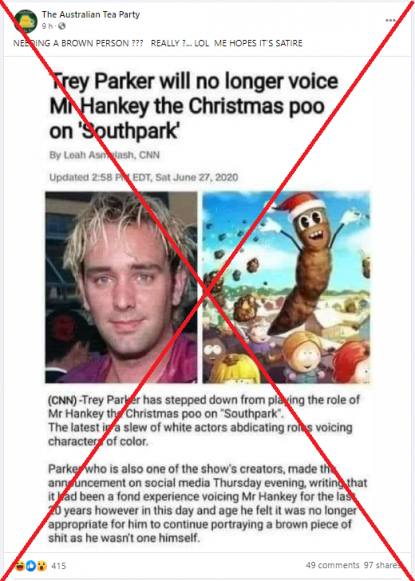 “Mr. Hankey, the Christmas Poo” is a character in the American animated sitcom South Park. The character first appeared in an eponymous episode on December 17, 1997.

Some Facebook users appeared to believe the report was genuine.

One user commented: “No one cares [if] a guy who does voices for cartoon characters doesn't want to voice a character anymore.”

Other instances of the image appeared in Facebook posts here, here and here.

The claim, however, was originally shared as satire.

The purported report has been manipulated from an unrelated CNN article.

A Google search of the author and date listed in the purported CNN report found this article.

Below is a comparison between the misleading post (L) and the genuine CNN article (R), with the author and timestamps highlighted in red on both images: 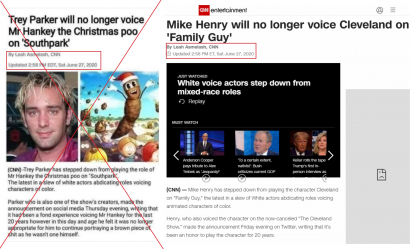 In response to the misleading post, a CNN spokesperson told AFP that the article was manipulated.

“We can confirm that it is doctored and not a real CNN article (it is not even in CNN’s official font),” the spokesperson said by email on April 21, 2021.

As of April 22, 2021, there are no credible reports that Parker has stepped down from the role.