Multiple social media posts share an image alongside a claim that it shows a boy, who survived a terrorist attack at a hospital, meeting his friend. The claim is misleading: the photo actually shows a Palestinian boy who survived an arson attack by Jewish extremists targeting his home was welcomed by friends and relatives at his village after his trip to Spain to meet Real Madrid football players. 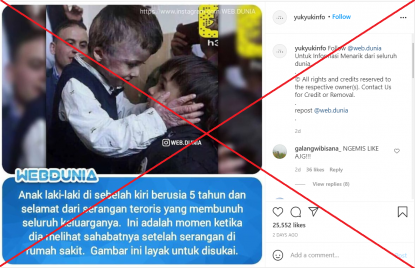 The image has an Indonesian-language text that translates to English as: “The boy on the left is 5 years old and has survived a terrorist attack that killed his family. This is the moment when he meets his best friend after an attack at a hospital. This photo deserves to be liked.”

A reverse image search on Yandex found the photo in the post was published by AFP here on March 22, 2016.

The photo’s caption says, “Five-year-old Ahmed Dawabsha (L), a Palestinian boy who survived a firebombing by Jewish extremists targeting his family home that killed his parents and brother, is welcomed by friends and relatives upon his return to his home-village of Duma after a visit to Spain to meet players from Real Madrid on March 22, 2016.”

Below is a screenshot comparison between the photo in the misleading post (L) and the original AFP photo (R): 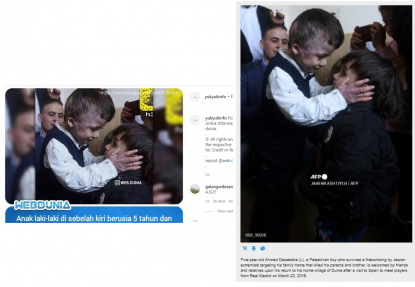