A video has been viewed tens of thousands of times in multiple social media posts that shows the leader of a Pakistan extremist party encouraging people to pray at a notable Muslim shrine in the city of Lahore so they can be “healed” from Covid-19. The claim is misleading: there is no credible evidence that prayer can cure Covid-19. International health experts have previously warned against mass gatherings over fears they could exacerbate the spread of Covid-19.

The video shows the leader of the Tehreek-e-Labbaik Pakistan (TLP) party, Saad Hussain Rizvi, criticising measures by the Pakistani government which he claims have negatively affected his party.

Speaking in Punjabi, he rhetorically questions the effectiveness of a government-mandated closure of the Data Sahib shrine -- one of the oldest Muslim shrines on the subcontinent -- in the Pakistani city of Lahore due to the coronavirus.

“Brother, what corona would spread from Data Sahib [shrine in Lahore]?” he says. “Those with the coronavirus would go there and say ‘I’m healed’. That’s called believing and having faith”. 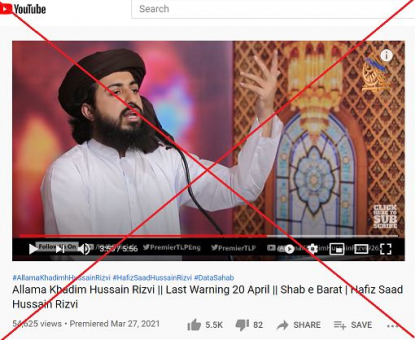 Screenshot of the video with the misleading comments. Taken on April 15, 2021.

Data Sahib, together with 547 other shrines in the province of Punjab were closed until April 15, 2021 due to rising coronavirus cases in Pakistan. Pakistani media outlet Geo News reported on the closures here.

Below is a screenshot of one of the posts (L) and some comments from users who appear to believe the claim (R): 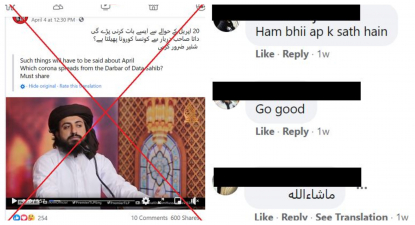 The claim is misleading: there is no credible evidence that prayer alone can cure Covid-19. Pakistani authorities have warned people against attending large gatherings in a bid to curb the spread of the coronavirus.

According to a guideline on social distancing issued by Pakistan’s Ministry of National Health Services, individuals should “avoid large and small gatherings in public spaces like restaurants, parks, libraries and other such venues to reduce the occurrence of transmission”.

In separate guidelines issued for religious holidays, the ministry advised those with Covid-19 or symptoms of Covid-19 not to attend religious processions.

In April 2020, a religious gathering in Lahore attended by more than 100,000 people led to tens of thousands being quarantined by the Pakistani government, AFP reported here.

The Centers for Disease Control and Prevention (CDC) in the US offers some guidelines on how to hold religious events safely but ultimately recommends that people should avoid large gatherings.

“All countries with community transmission should seriously consider postponing or reducing mass gatherings that bring people together”, reads a guideline on mass gatherings issued by the World Health Organization (WHO).