A photo has been shared in multiple Facebook and Twitter posts that claim it shows a mosque set on fire by “extremists” in France. The claim is false: the image shows a mosque in the US state of Connecticut where a fire broke out in 2019.

"In France, extremists set fire to two mosques, Muslim lives in danger. See the picture. And our leader, Saad Rizvi, was arrested for demanding the French ambassador be expelled from Pakistan,” reads the post’s Urdu-language caption. 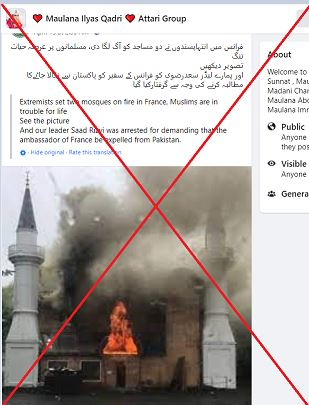 Screenshot of the photo shared under the false claim. Taken on April 22, 2021.

The photo circulated online shortly after two mosques, the Avicenna Islamic Cultural Center in the French city of Rennes and the Arrahma Mosque in Nantes were vandalised. AFP reported on the incidents here.

Protests erupted across Pakistan after his arrest on April 12, 2021. Rizvi had been calling for the expulsion of the French ambassador for months after cartoons depicting Islam’s Prophet Mohammed were allowed to be published in France, an act many Muslims consider blasphemous, AFP reported here.

A reverse image search on Google found a very similar photo published here in a report about a fire in the US state of Connecticut by US media outlet Newsweek on May 13, 2019.

The report states the image shows the Diyanet Mosque in the city of New Haven following a fire.

Screenshot comparing the image in the posts with the false claim (L) and the one from Newsweek (R). Taken on April 22, 2021.

The New Haven Fire service tweeted three photos here on May 13, 2019 of the same mosque on fire.

The photos of the mosque all correspond with an image tagged at the mosque’s location here on Google Maps in April 2019, one month before the fire that broke out.

Below is a screenshot comparison of the image in the misleading post (L) and the image of the same mosque tagged on Google Maps (R):

Screenshot comparing the image in the misleading post (L) and the one from Google Maps (R). Taken on April 22, 2021.