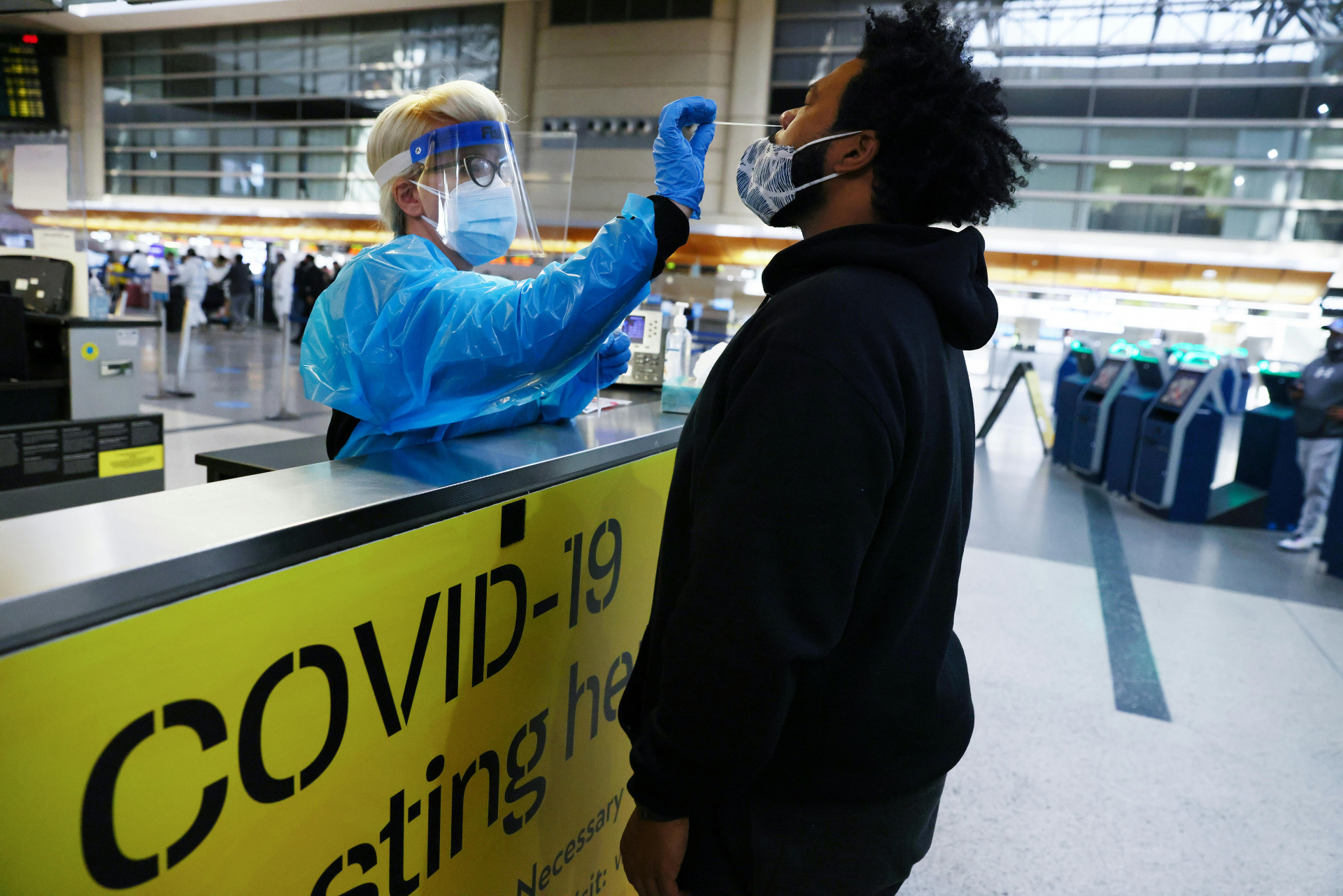 Coronavirus was not staged by philanthropists to control people

A German lawyer claims in a video interview with Steve Bannon that the coronavirus pandemic was planned by global elites including the Rockefeller Foundation as part of an elaborate scheme to exert control of citizens. To do this, governments used PCR tests to justify lockdowns and other measures, the lawyer alleges. This is false; while the Rockefeller Foundation and other experts did study pandemic scenarios, they in no way fabricated a deadly outbreak, and health authorities say PCR tests are reliable.

“REVEALED- How Globalists planned the Covid-19 Pandemic for 10 years,” says a June 10, 2021 Facebook post. It features an interview by Bannon, once an advisor to former president Donald Trump, with the lawyer Reiner Fuellmich. 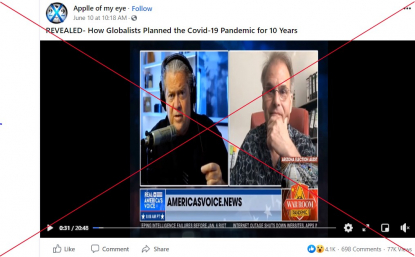 Similar claims by Fuellmich were debunked by AFP Factuel in October 2020.

“Concrete plans for this pandemic were made by very rich and powerful people some 10 years ago, amongst them the Rockefeller Foundation,” Fuellmich tells Bannon. “And the final, I guess you could call it, a dry run, was Event 201 which happened in October of 2019.”

He added later in the interview: “The people who are in back of this don't care about money. They care about control.”

The Rockefeller Foundation is a philanthropic organization whose interests include public health, medical science, and the global food system.

It commissioned a report titled: “Scenarios for the Future of Technology and International Development.” The report, issued in 2010, was the result of a year-long project that used scenario planning to explore the role of technology in international development, and implications for the poor and vulnerable.

Of the four imagined outcomes, one involved a 2012 global pandemic when “national leaders around the world flexed their authority,” a trend that intensified even after the pandemic, according to the scenario.

Another included large-scale catastrophes, among them a once-in-a-millennium drought linked to climate change, and which led to weakened government power -- contrary to the first hypothetical outcome.

“Please keep in mind that the scenarios in this report are stories, not forecasts,” the document cautioned, urging readers to regard dates and other specifics as proxies, “not as necessary conditions for any particular scenario to unfold.”

It added: “Importantly, scenarios are not predictions”

Ashley Chang, the Foundation’s head of media relations, told AFP there is “a growing body of misinformation out there around this report and the chapter on pandemics. Contrary to these conspiracy theories, The Rockefeller Foundation did not and is not fabricating a pandemic.”

She said the report aimed to help governments and development professionals “make better plans to actually address a real pandemic such as the one we have today.”

Fuellmich also refers to Event 201 as evidence that the pandemic was planned. Event 201 was a “tabletop exercise” with leaders from business, government and health care examining responses to a hypothetical pandemic. The Johns Hopkins Center for Health Security hosted the exercise in October 2019, in partnership with the World Economic Forum and the Bill and Melinda Gates Foundation.

Gates has been a frequent target of misinformation, including that he plans control of the world through vaccination.

“For the scenario, we modeled a fictional coronavirus pandemic, but we explicitly stated that it was not a prediction,” the Johns Hopkins Center said in a 2020 statement.

AFP has previously debunked other claims that cited Event 201 as evidence that the pandemic was pre-ordained, including the August, 2020 film “Plandemic: Indoctrination.”

But the false narrative that the coronavirus was made up by global elites to control people is among conspiracy theories gaining wide global traction, and which AFP has debunked.

There have been more than 177 million cases and 3.8 million deaths globally from Covid-19, the illness resulting from SARS-CoV-2 infection.

The virus first emerged in China but President Joe Biden on May 26, 2021 gave US intelligence agencies three months to report on its origins.

Fuellmich claims that global elites used an accident at a Chinese lab simply as the “springboard” to set their “plandemic” into motion, using PCR tests.

Polymerase Chain Reaction, or PCR, tests are a commonly used means to identify the presence of SARS-CoV-2.

“At this point we believe this is not a real pandemic. Rather this is a planned staged pandemic. It's not a corona pandemic but it's a PCR test pandemic because that's the only thing that underlies” anti-coronavirus measures taken by the authorities, Fuellmich tells Bannon.

“It is absolutely impossible for a PCR test to detect infections,” Fuellmich says.

These tests work by amplifying, or making many copies of, the genetic material of the virus to make it detectable in very small amounts.

He claims that, above a certain level, the amplification cycles used in the testing will lead to a false positive rate of at least 97 percent, and the World Health Organization (WHO) recommended a standard amplification level that was too high.

As a result, “most of the cases that are positive cases are no cases at all,” Fuellmich says.

AFP has previously debunked claims that the WHO told labs to reduce the number of cycles.

In an email to AFP on January 22, 2021 the WHO said: “Since the beginning of 2020, WHO has received 10 reports of problems related to PCR tests for the detection of SARS-CoV-2... The reports were for misdiagnosis, both false positive and false negative results.”

Ten reports is a tiny fraction of the tests conducted in the United States, which by June 17, 2021 had exceeded 458 million, according to the Centers for Disease Control and Prevention (CDC).

Reverse Transcription Polymerase Chain Reaction (RT-PCR) is one method of Nucleic Acid Amplification testing, which the CDC says on its website detects ribonucleic acid (RNA) sequences that comprise the genetic material of the virus. The tests “can reliably detect small amounts of SARS-CoV-2 and are unlikely to return a false-negative result of SARS-CoV-2,” it says.

False positives are also unlikely, contrary to the claims of Fuellmich.

The ability of a test to identify a particular virus and not confuse it with another pathogen is known as specificity, and currently “the specificity of RT-PCR tests is estimated in the order of 99 percent,” making false positives extremely rare, Dr Cédric Carbonneil, of France’s High Authority of Health, told AFP Factuel in a September 2020 report.

Juan Carballeda, an Argentine researcher, said a PCR test “detects the presence of the genome of the virus, and that is beyond doubt.” Carballeda, of Conicet, Argentina’s National Council of Scientific and Technical Investigations, is also a member of the Argentina Association of Virology. He was quoted by AFP Factual in July 2020.

Dr Juan Sabatte, a microbiologist also with Conicet, told AFP Factual in the same report that the PCR test “detects specific RNA sequences present in the RNA of the SARS-CoV-2 virus.”

Fuellmich is listed as an “affiliate” of the Elders Without Borders group linked to a lawsuit filed in Canada over “crimes against humanity” caused by government-imposed measures against the coronavirus. Ontario’s Superior Court dismissed the case under a provision against “frivolous” proceedings.