A tweet claims a billboard with Elon Musk’s photo that reads “Defend billionaires” can be seen outdoors. But the sign is not real. It is the digital artwork of designer Martin Sprouse, and the image was published on Sprouse’s Instagram account the month before it spread on Twitter. 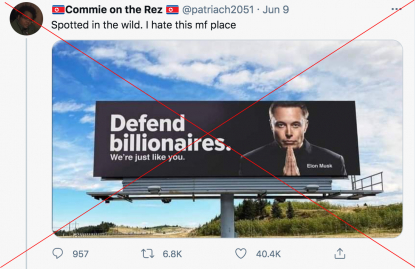 The image started to be widely shared on social media after the release of an investigative report by New York-based journalism nonprofit ProPublica, which revealed several of the richest Americans have paid zero income tax in some years, including Tesla chief Musk and Amazon’s chairman Jeff Bezos.

Some social media users, however, were not fooled by the visual imagery and recognized it as a creation of California designer Sprouse.

AFP Fact Check found that the original artwork was posted on his official Instagram account “3chordpolitics” on May 18, 2021, about three weeks before the image started to get shared on social media by other users, a search on social media monitoring tool CrowdTangle shows.

A similar creation using Bezos’s photo was published by Sprouse on June 11, 2021.

In a 2020 interview on YouTube, the artist explained how he does these pieces mainly to express himself, “and maybe, I think people figure it out on their own, they see the graphic and it confirms what they’re feeling, or pisses them off... or they feel comfort and solidarity, which I think is a huge part of the graphics.”

“You make a ‘Fuck the police’ graphic, not just to piss off the police, it’s to make comfort for people that have that same feeling,” he said during the interview.

At the time of writing this article Sprouse had not responded to an AFP request for comment.