Online posts viewed thousands of times claim that a 14-minute audio message covering various conspiracy theories about COVID-19’s origin was voiced by Ghanaian President Nana Akufo-Addo. The claim is false; the recording does not match Akufo-Addo’s voice while his information minister dismissed it as “obviously false”.

A WhatsApp message forwarded to AFP Fact Check reads: “Unbelievable but true. Ghanaian President came across this secret documents (sic) about COVID-19 and decides to release it to his people out of patriotism. Please carefully listen to it and share widely to expose this evil. Forwarded as received.”

It is accompanied by a 14-minute voice note featuring a man’s voice claiming to be quoting a Rockefeller Foundation article, which is said to detail how the novel coronavirus was biologically manufactured in a laboratory then released into the world.

On June 25, 2020, American author Dr Christiane Northrup shared the same claim on her public Facebook page, which has more than 450,000 followers.

“Let's hear it for the President of Ghana!” she wrote alongside a YouTube link of the voice recording. 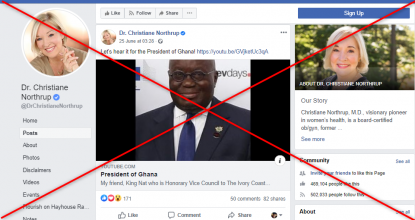 Not the president’s voice

While the accent of the man in the voice recording is west African, it is distinctly not that of Akufo-Addo when compared to some of his public appearances, like here and here.

Ghana’s Information Minister Kojo Oppong Nkrumah also confirmed to AFP that the audio recording was not made by the president, dismissing the claim that it was, as “obviously false”.

“We expect a lot of these fabrications at this time that we are entering electioneering season. It's not even his voice,” Nkrumah told AFP via WhatsApp.

An online search reveals a Facebook post published on May 19, 2020, that features the same text read aloud in the audio clip. This post, which predates those with the audio recording, does not make any mention of the Ghanaian leader.

The recording details how COVID-19 was supposedly created in a laboratory then released systematically in various countries, thereby forcing people to conform to the “New World Order”.

However, the World Health Organization (WHO) has maintained that there is no evidence that the virus was manufactured in a laboratory, describing the assertions as “speculative”. Other scientists have also dismissed this claim.

The voice in the audio clip enumerates a long list of actions taken to supposedly create and release the virus, none of which are featured in any document on the Rockefeller Institute’s website. The “Lock Step” scenario that it references is one of the speculative scenarios in the Rockefeller Foundation’s “Scenarios for the Future of Technology and International Development” report. This publication from 2010  imagined how technology and development could evolve in the future, using several fictional scenarios.

Though the document does not appear on the Foundation's website, Ashley Chang, the foundation's head of media relations, confirmed to AFP in an email that the “report was done by a grantee of the Foundation”.

The Lock Step scenario imagined “a world of tighter top-down government control and more authoritarian leadership, with limited innovation and growing citizen pushback” in which a new influenza virus hit in 2012 and spread worldwide.

In his list of action items, the voice in the message also says: “Simulate the Lock Step hypothesis just prior to the planned research strain release using a real-world exercise as a final war game to determine expected response/timelines/outcomes.” This the voice attributes to “Gates Event 201, October 2019”.

Event 201 was a tabletop pandemic exercise organised by the Johns Hopkins Center for Health Security in partnership with the World Economic Forum and the Bill & Melinda Gates Foundation held on October 18, 2019.

The event, which examined where public-private partnerships would be necessary during the response to a severe pandemic, has led to conspiracy theories that COVID-19 was manmade and was planned during the exercise.

However, the Johns Hopkins Center for Health Security released a statement noting that no predictions were made during the high-level meeting.

“Recently, the Center for Health Security has received questions about whether the pandemic exercise predicted the current novel coronavirus outbreak in China. To be clear, the Center for Health Security and partners did not make a prediction during our tabletop exercise. For the scenario, we modeled a fictional coronavirus pandemic, but we explicitly stated that it was not a prediction. Instead, the exercise served to highlight preparedness and response challenges that would likely arise in a very severe pandemic,” reads the statement.