Footage of helicopters flying low over a body of water has been shared repeatedly in multiple Facebook, Twitter and YouTube posts alongside a claim it shows Indian Air Force attack helicopters flying over Pangong Lake in Ladakh, an Indian border region where a deadly clash between Indian and Chinese troops broke out in June 2020. The claim is false; the video actually shows US military choppers in the US state of Arizona. 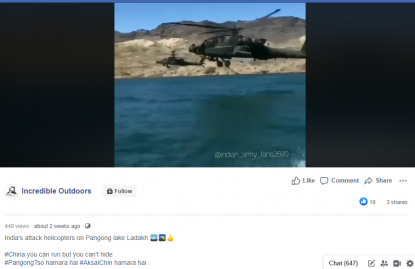 The post’s English and Hindi caption reads: “India's attack helicopters on Pangong lake Ladakh. #China you can run but you can’t hide. #PangongTso is our and #AksaiChin is our.”

Pangong Lake, also known as Pangong Tso, is a lake in Ladakh that extends into Aksai Chin, a neighbouring region administered by China.

The area has been a flashpoint in the long-running border dispute between the two countries. In June 2020, it was the site of a deadly clash between Indian and Chinese troops, as AFP reported here.

Several social media users -- for example on Twitter here -- replied to the misleading posts stating that the video actually shows helicopters flying over Lake Havasu in the southwestern US state of Arizona.

In response to the misleading posts, the Lake Havasu City Convention and Visitors Bureau said the body of water in the video was “definitely Lake Havasu”.

“It was shot by a boater out on the lake, but I can tell you that it was within the past couple of weeks that I saw it making the rounds on social media. Our airport has a fueling contract with the US military, so we see these types of aircraft from time to time,” a spokesperson for the bureau told AFP by Facebook messenger on June 9, 2020.

The agency also noted a comment on its Facebook page from a Facebook user named Daniel Warner who claimed to have recorded the footage on June 17, 2018. 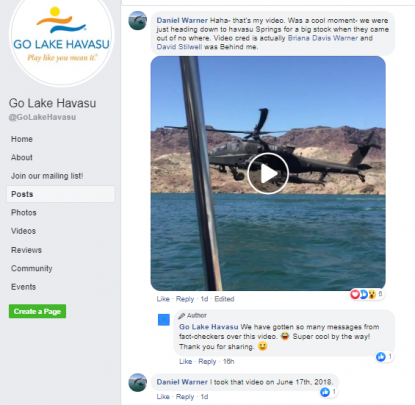 Warner shared two more videos of the helicopters taken from a different angle. He posted the videos in the comments on this Facebook post.

The US helicopters seen in the misleading posts are a different colour to the helicopters commonly seen used by the Indian Air Force (IAF). They also do not bear any IAF insignia.

The colour difference and lack of IAF insignia is evident in the comparison screenshots below of a chopper seen in the misleading post (L) and the photo of IAF’s helicopter (R):