As countries around the world scramble to roll out vaccination campaigns, a video showing computer-generated images of people being implanted with microchips is circulating online alongside warnings that Microsoft co-founder Bill Gates plans to "obtain total control" of the world through vaccination. This claim is misleading; the original clip is from a German TV report about coronavirus conspiracy theories. AFP has previously debunked similar claims about Gates and implants.

This video was posted here on Facebook. It has been viewed more than 1,000 times.

"Share! Stop! Do not accept the vaccine as it is the sign of the beast,” the Romanian-language caption reads. 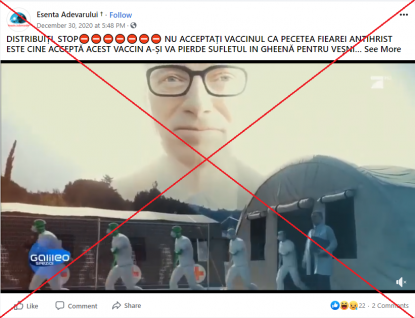 The 18-second clip shows people dressed in white running into a tent as armed soldiers look on. A close-up shot of a person’s arm then shows them receiving an injection that features the Microsoft logo. The people in white then emerge from the tent as Bill Gates’s face appears in the sky.

A voice-over in German says, “We are forced into vaccination out of fear of the virus. Greedy businesspeople around Microsoft founder Bill Gates intend to use this to implant a microchip into mankind in order to obtain total control.”

A blue logo in the bottom-left corner of the video reads “Galileo Spezial”.

The video has been shared on social media around the world in various languages, including Arabic, Thai and Romanian.

Microsoft co-founder Bill Gates has been a leading advocate for a Covid-19 vaccine, a stance that has made him a target of anti-vaccine campaigners and other groups who have implicated him in various conspiracy theories about the crisis.

The Bill & Melinda Gates Foundation has invested more than $1.75 billion to fight the pandemic.

Waseem Khawaja, a doctor and spokesman for the Pakistan Institute of Medical Sciences in Islamabad, said people should ignore such conspiracy theories.

“This kind of vaccine which has a mind-control chip is not in our knowledge,” he said told AFP by phone on January 19, 2021. “People should not pay heed to such social media posts and make sure to get only government-approved vaccines for Covid-19".

Nigel McMillan, a professor of infectious diseases at Australia’s Griffith University, also rejected the idea that microchips could be implanted through Covid-19 vaccines.

The video in the misleading post is a clip from a longer video by German TV station Galileo. The original video is an explainer about conspiracy theories circulating during the pandemic.

A keyword search on Galileo’s YouTube channel found the original report posted on December 19, 2020, called “Why are conspiracy theories booming?”

“In 2020, various conspiracy theories spread with COVID-19,” the description on Galileo’s website reads.

“Corona is an invention of the establishment, Bill Gates wants to usurp world domination with a vaccine, 5G transmission masts spread the coronavirus. Anti-corona demos are becoming an instrument for right-wing extremists. Why is the global event a breeding ground for conspiracy theories? What are they and why do right-wing extremists take advantage of them? 'Galileo Special' is looking for answers.”

The 50-minute report includes an interview with Sabine Riede, an advisor for German consulting agency Sekten-Info NRW who explains how people can fall for conspiracy theories “because they feel powerless”.

Prior to footage shared in the misleading clip, the German narrator says “It gets difficult, if we decline vaccines because of these [conspiracy theories]. The theory is:”

The footage in the misleading clip starts at the 21:52 minute mark.

Bill Gates has repeatedly spoken out to reject conspiracy theories accusing him of meddling with Covid-19 vaccines.

“I’ve never been involved with any microchip thing,” Gates told reporters in June 2020 following the announcement of a five-year, USD1.6 billion initiative to deliver vaccines to “the world’s poorest countries”.

Contacted by AFP in June, a spokesperson for the Bill & Melinda Gates Foundation said any purported link between Gates and microchipped vaccines was false.

In an interview with Reuters news agency on January 27, 2021, Gates said “nobody would have predicted that I and Dr. Fauci would be so prominent and really evil theories about did we create the pandemic are we trying to profit from it and on and on. I’m very surprised by that.”