Two posts shared hundreds of times on Facebook in South Africa claim to offer 100 job openings at South Africa’s Post Office. However, this is a scam, and the postal service has warned that it does not advertise any jobs on Facebook.

The hoax advert was first posted here on Facebook on June 2, 2021, on a page called “Post Office Jobs”, where it was shared over 1,200 times before the post went offline. 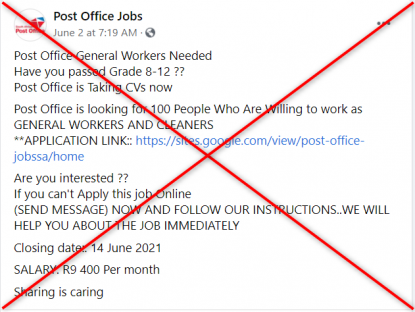 The post asked applicants to submit documents through a Google Sites link. It also asked them to share the post and instructed those who were unable to apply through the link to send a direct message to the page for further instructions.

The same jobs listing was also published on another jobs-focused Facebook page here on June 4, 2021.

“Naturally we do not expect would-be employees to pay for their application,” he said.

According to Facebook’s page transparency information, the impostor Facebook page was created on March 28, 2021. As of June 11, the page only had one post - this fake job advert. 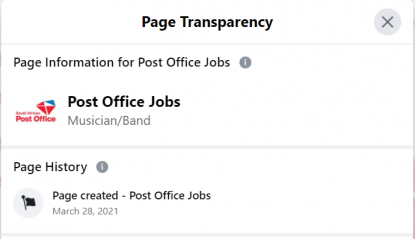 More than a third of South Africa’s working population is currently unemployed, making the country fertile ground for job scammers.

On June 1, 2021, AFP reported that South Africa’s unemployment rate had climbed to its highest level on record in the first quarter of 2021. The jobless rate stands at 32.6 percent, which is the highest figure since the start of the country’s labour force survey in 2008.

Both Africa Check and GroundUp have recently published in-depth reports detailing how scammers are preying on unemployed South Africans. The reports reveal that social media platforms such as Facebook are littered with pages advertising jobs that do not exist.

Often, the scammers ask for application or registration fees from desperate job seekers. Alternatively, they ask them to share posts and make them go viral, then earn money through Google AdSense, which monetizes posts with high engagement.