Skip to main content
In this photograph taken on March 14, 2016, farmers ride ox carts on the farmlands along the Yangon to Naypyidaw highway in Swar township. (Photo by ROMEO GACAD / AFP) (AFP / Romeo Gacad)

An image has been shared in various blogs and Facebook posts in May 2021 alongside a claim that a Myanmar military-owned TV channel announced a new cattle law. The claim is false: the purported screenshot of the TV broadcast has been doctored. As of June 14, 2021, there were no reports of a new cattle law being announced in Myanmar. (A screenshot of the misleading blog post taken on June 4, 2021)

The Burmese-language headline at the bottom of the purported news screenshot reads: “MWD: According to the section 969 (b), if a household owns more than two oxen, extra oxen will be nationalised.”

The blog post reads in part: “A villager in Pyinsi village in Mandalay region has now been in custody as he owns more than 30 head of cattle. He has been sued under section 59 (d)/969 (b).”

The claim circulated online after Myanmar’s military continued a crackdown on protesters and rebel groups following its February coup.

Following the coup, the military has also taken control of the state TV channel MRTV,  whose logo can be seen in the top right-hand corner of the doctored image.

Keywords search on Google found the same image of cattle published here in a news report on November 10, 2018 by local media outlet DVB.

The report is about rising cattle prices in Myanmar in 2018. 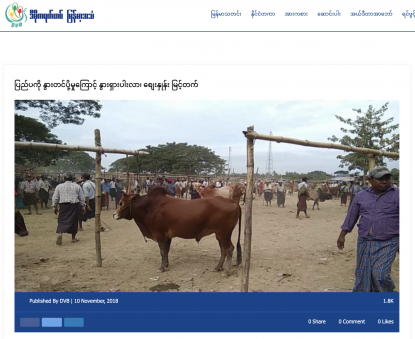 The Burmese-language headline translates to English as: “Oxen become rare and expensive due to exporting more oxen.”

Another keyword search found similar visuals of a MWD news presenter in videos published here and here. The clips were published on February 1, 2021, after the Myanmar military seized power in a coup.

The narrator in the news video states the military seized power due to alleged fraud in the 2020 general election in Myanmar.

The same news footage was broadcast on MRTV and MWD TV channel on February 1, 2021 as shown in videos uploaded by media outlets Ruptly and the South China Morning Post.

Below are two screenshot comparisons of the image in the misleading blog posts (L) and the original news images (R): 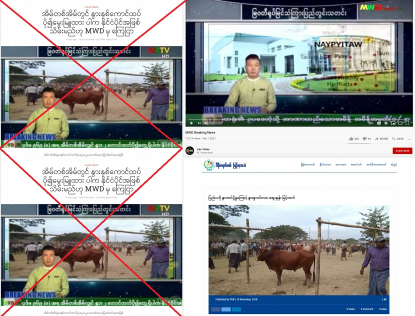 Keyword searches on MWD and MRTV’s websites as well as on Google also found no credible reports of a new cattle law in Myanmar in May 2021.