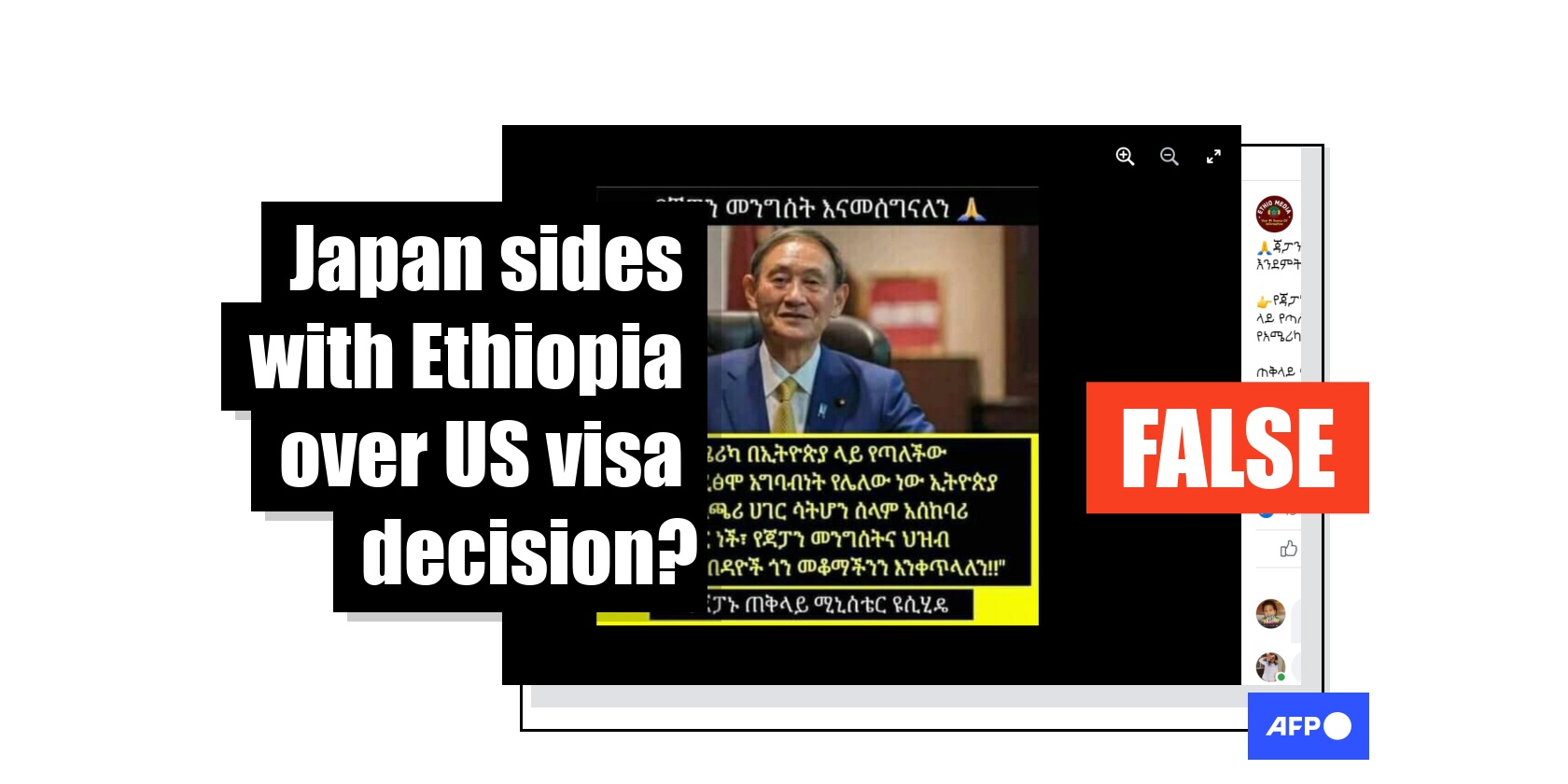 US Secretary of State Antony Blinken issued a statement on May 23, 2021, announcing visa restrictions against current and former Ethiopian and Eritrean government officials. Following his statement, posts shared on Facebook in Ethiopia claimed that Japanese Prime Minister Yoshihide Suga had vowed to stand by Ethiopia and criticised the US decision as “illegal”. However, this is false; a Japanese embassy official in Addis Ababa dismissed the claim as “fake”.

The post, archived here, has been shared more than 200 times since it was published on Facebook on May 30, 2021.

Written in Amharic, the translated caption partly reads: “US must stop falsely accusing Ethiopia in order to further its own interests”.

Screenshot of the false claim on Facebook, taken June 8, 2021

The post includes a meme that contains an image of Suga and a block of Amharic text that translates into English as: “US sanctions on Ethiopia are utterly illegal. Ethiopia is not a violent country but a peacekeeping one. Japanese government and people will always stand for the victims. Japan’s Prime Minister, Yoshihide”.

The same claim was also shared on Facebook here on a page called “Ethio Media”, an account with nearly 15,000 followers.

The claims emerged after Blinken released a press statement on May 23, 2021, announcing visa restrictions on Ethiopian and Eritrean officials “who have conducted wrongful violence or other abuses against people in the Tigray region of Ethiopia, as well as those who have hindered access of humanitarian assistance to those in the region”.

A conflict in the northern Ethiopian region of Tigray that began in November 2020 has left more than 90 percent of people in the region needing emergency food aid, according to the United Nations. 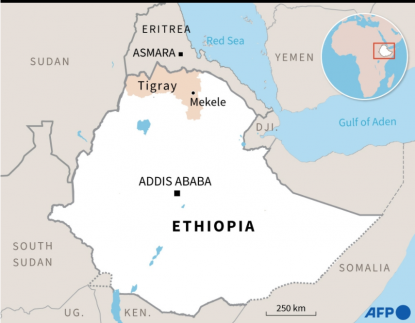 However, the statements attributed to Suga are fabricated and Dejene Sakoume, coordinator of press and culture at the Embassy of Japan in Ethiopia, dismissed them as “fake news”.

“This story was completely made up,” he told AFP Fact Check.

Furthermore, the last official communication between Japan’s prime minister and his Ethiopian counterpart, Abiy Ahmed, was a phone conversation on April 21, 2020, when they addressed the Covid-19 crisis, details of which were published on the official website of Japan’s Ministry of Foreign Affairs.

“Our conversation affirmed to me that Africa has a strong ally post #TICAD and in times of crisis,” Abiy tweeted in response.

Good phone call with PM @AbeShinzo on how we can collaborate in addressing the #COVID19 crisis, particularly the economic and food security challenges that may arise as a result. Our conversation affirmed to me that #Africa has a strong ally post #TICAD and in times of crisis.

TICAD stands for Tokyo International Conference on African Development and has been led by the government of Japan, and co-hosted by the UN, since 1993. TICAD has been promoting Africa’s development by funding programmes in different sectors such as health, humanitarian development, and peace building.

AFP Fact Check contacted the US embassy for comment and will update this report when we receive a response.