This video shows an acting performance adapted from a movie

Screenshots widely circulated on social media in South Korea purport to show a father giving his son some final advice before donating his heart to save his sick child. The claim is false: the video’s original creator told AFP he acted out the scene in homage to a well-known Hollywood movie.

The claim and screenshots were shared here on Facebook on May 27, 2021. 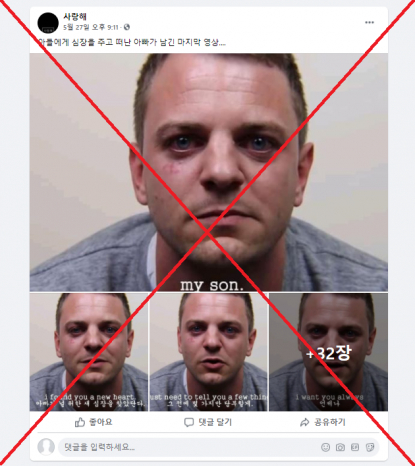 “The last video of a father who departed after donating his heart to his son,” the Korean-language text reads.

The screenshots shared in the post show a man purportedly filming his last words to his son. Each of the images contains captions both in English and Korean.

"My son, I found you a new heart. I just need to tell you a few things. I want you to always listen to your mom because she’s your best friend. Family is so important," the text begins, accompanied by photos of a tearful man looking into the camera.

Identical claims and screenshots were also shared here on Daum Cafe; and here and here on Tistory, a South Korean social media platform.

Comments on posts sharing the video showed that several social media users appeared to believe the footage genuinely showed a father speaking to his son.

“Can’t the father use an artificial heart,” one person commented.

“The son must be very sad watching this,” another wrote.

Through a Google keyword search, AFP found the original video uploaded here by a YouTube user called “TAKE 2 THE SCREEN.”

The video, titled “Father’s final words to his dying son!”, was uploaded on June 2, 2016, and has been viewed more than 12 million times.

The channel is managed primarily by Lewis Saunderson, a British actor who is credited as the writer, producer and director of dozens of videos portraying a variety of performances in different roles.

The clip is “a piece of acting taken from a famous Hollywood movie called JOHN Q starring one of my favourite actors, Denzel Washington, whose character delivered the same speech to his dying son in the dramatic scene,” he told AFP.

“Due to the nature of the performance and the style, people decided to believe that it was real life, which I have no control over and take it as a big compliment of my acting skills,” he added.

Saunderson previously debunked false claims about his video in another YouTube video posted on January 17, 2018 titled “I'M ALIVE! Reaction to my video going viral [HALF A BILLION VIEWS].”

“I made the video because I wanted to show off my acting skills and the speech was taken from a movie called ‘John Q.’...I just tweaked around with the dialogue and adapted it slightly to fit my British accent and help bring authenticity to the piece,” he said. 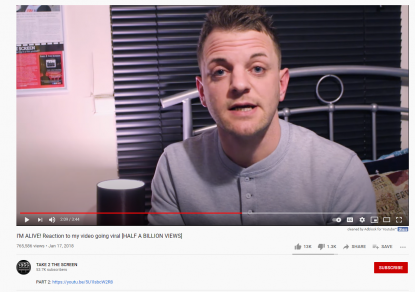