Multiple posts on Facebook shared in Tanzania claim to promote job vacancies at various South African companies. However, the listings are a hoax and do not lead to the advertised listings. The alleged employers also confirmed that the ads were fake.

“Post Office is hiring 1200 general Workers to work with R350 beneficiaries. Send us your number. we will call u, no certificate wanted. Salary R 7 000 every Month (sic),” the post’s caption reads.

The post includes the company logo and a link where applicants can apply. 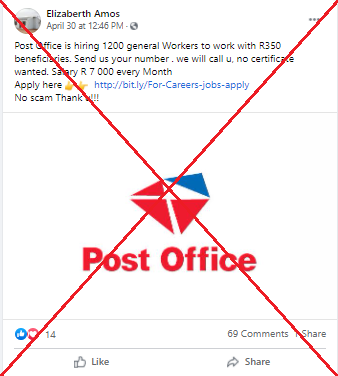 AFP Fact Check followed the link, which redirects users to a webpage on Google Sites, where various jobs and companies purportedly list job offerings. However, each of those links further detours to the home page of JobLink SA -- a job aggregator website that has genuine employment opportunities.

But a search of JobLink did not yield any results for the positions at the Post Office.

Johan Kruger, a spokesman for the South Africa Post Office confirmed that the job listing on Facebook was “a scam”.

“Vacancies at the SA Post Office are advertised only on our website under careers,” he told AFP.

Please do not respond to this scam! Vacancies at the Post Office are published on our website - we never use unverified social media. 'Wandie' has been reported to the group administrator & Facebook. pic.twitter.com/pKVJigLWNh

It uses the same modus operandi as the first fake post, with users being redirected through several pages before landing on real job sites. 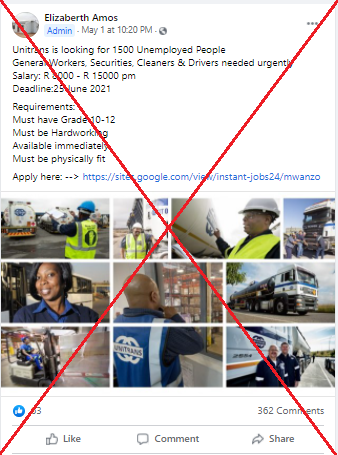 “Our procedures for advertising our vacancies are formal and managed within normal corporate practice parameters. These include recruiting through established recruitment agencies and internally,” he told AFP Fact Check.

Nobrega added that Unitrans Africa’s “recruitment strategy does not include postings in any form of social media.”

Digital verification organisations Africa Check and DFRLab published a report about how scammers use Facebook to prey on the unemployed and make more money.

In essence, link aggregators direct traffic to the websites and the page host earns money for each visitor.

AFP Fact Check has debunked several job hoaxes in the past, including here in April 2021 about jobs in Kenya.

Corporations like Coca-Cola, and Danone have also been targeted by similar scams (debunked by AFP Fact Check here and here).