Three photos shared repeatedly in multiple Facebook posts purport to show students in the Philippines calling for an end to community-run stalls offering free food during the Covid-19 pandemic. But these photos have been doctored: they originally show students supporting the food stalls. 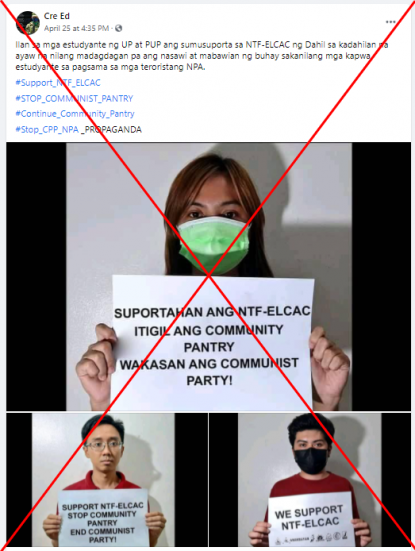 The post's caption states the images show university students calling for an end to “community pantries”. In the Philippines, community-run stalls have been set up to offer free meals to struggling families during the pandemic. AFP reported on the initiative here.

The photos purport to show the students holding placards with Tagalog-language text that translates to English as: “SUPPORT THE NTF-ELCAC, STOP COMMUNITY PANTRIES, END THE COMMUNIST PARTY!”

“WE SUPPORT THE NTF-ELCAC”.

“NTF-ELCAC” is the acronym for the National Task Force to End Local Communist Armed Conflict.

President Rodrigo Duterte's spokesman Harry Roque has praised the community pantries for showing "the best of the Filipino in the worst of times."

But police have reportedly profiled volunteers and a spokesman for Duterte's anti-communist task force even misleadingly accused the movement of being rebel sympathisers.

The images, however, have been doctored.

Keyword searches found the original photos were posted here on Facebook on April 23, 2021.

In the original photos, the students were in fact holding placards that defend community-run stalls.

Below are screenshot comparisons of the doctored photos (L) and the original photos (R): 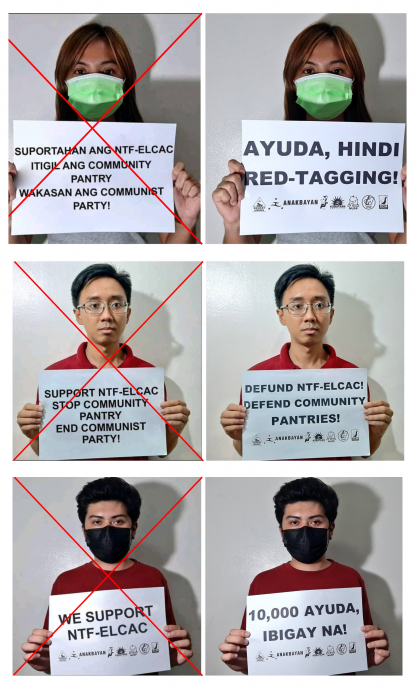 Raoul Manuel, one of the students pictured in the misleading posts, said the photos were doctored.

He told AFP: “Our photos [were] edited to change the contents of our printed calls.”

Regine Arninio, another student pictured, told AFP she is “not a supporter of NTF-ELCAC” as the misleading posts claim.