A video has been viewed tens of thousands of times in Facebook and Twitter posts claiming it shows a news report announcing that Indonesia has lifted a travel ban for the Muslim festival of Eid al-Fitr this year. However, the posts are intended as satire. The clip actually shows a newscaster performing tongue twisters in Kazakh. An Indonesian Transportation Ministry spokeswoman told AFP that travel is still banned during Eid in May 2021.

The video shows a female news anchor talking in an unidentified language alongside a chyron in Indonesian that reads: “Finally, Eid Travel Ban Lifted”.

The Indonesian-language tweet reads: “The news we have been waiting for”. 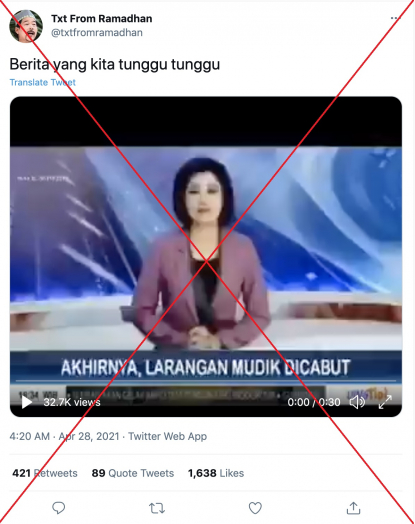 The video has also been shared with a similar claim on Twitter here, here, here and here; and on Facebook here.

The posts, however, are meant as a joke.

A reverse image search on Google found the video was previously posted here on YouTube on February 28, 2019.

The first few seconds of the video show a Kazakh flag alongside Turkish and English text that reads: “Kazakh Turkic Tongue Twister”.

The YouTube video does not show any Indonesian texts.

Contacted by AFP, a Kazakh diplomat confirmed that the woman in the video is performing tongue twisters. “It’s different tongue twisters in Kazakh language,” Kairat Malayev, counsellor of the Kazakhstan embassy in Indonesia, said on May 4, 2021.

Muslims in Indonesia are set to celebrate Eid al-Fitr, which marks the end of the fasting month Ramadan, from May 12 to 14, 2021.

To prevent the spread of Covid-19, the government has banned Eid travel from May 6 to 17, 2021. The restriction of Eid travel, as well as exemptions to the ban, is laid out in this Transportation Ministry regulation, dated April 5, 2021.

Transportation Ministry spokeswoman Adita Irawati told AFP on May 3, 2021, that “travelling during Eid is still banned.”