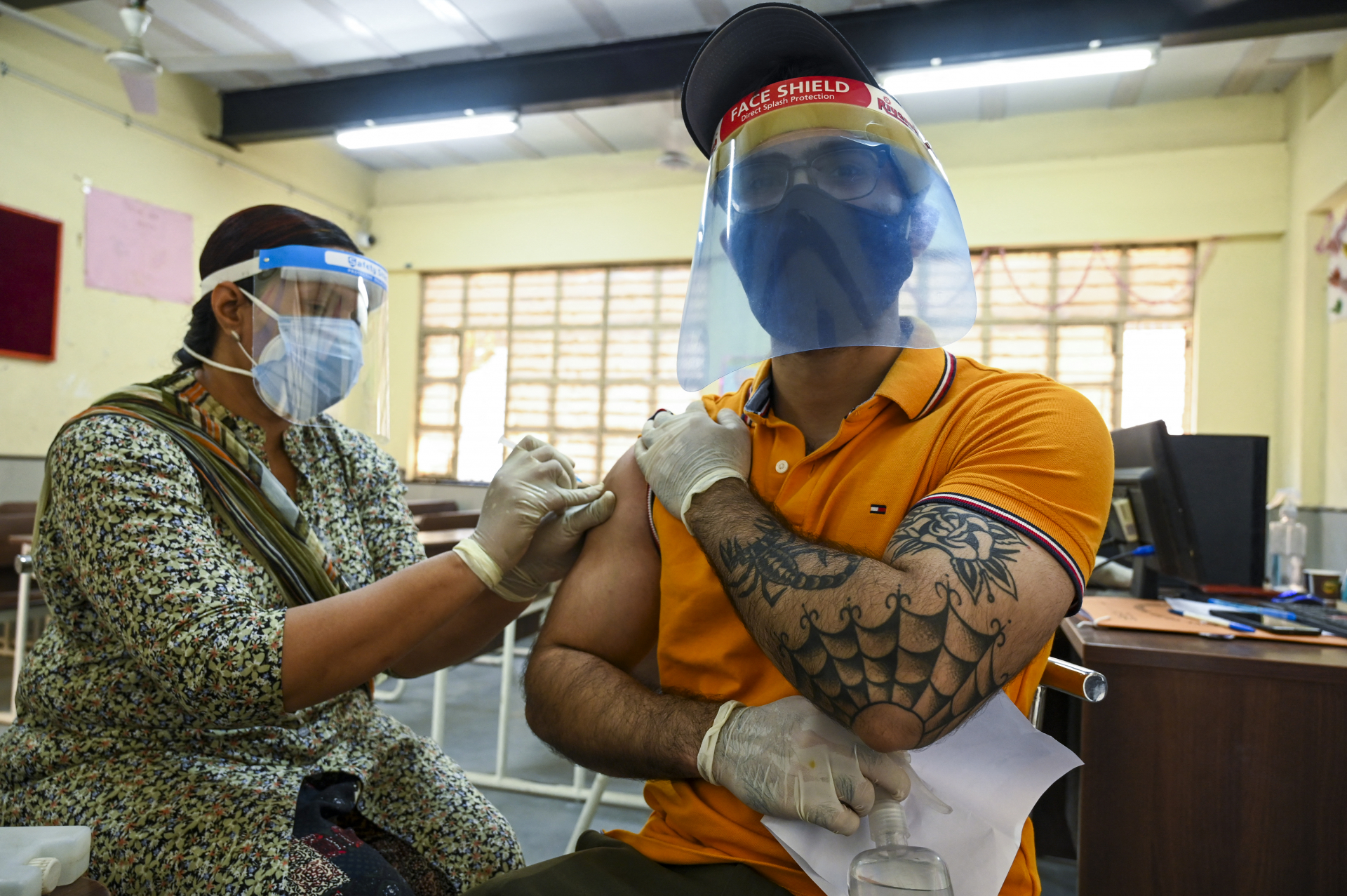 A health worker inoculates a man with a dose of the Covaxin Covid-19 coronavirus vaccine in a school-turned-vaccination centre in New Delhi on May 5, 2021. (Tauseef MUSTAFA / AFP)

Covid-19 vaccine does not cause impotence, health experts say

Social media posts share an image combining photographs of well-known Indian doctors with a claim that Covid-19 jabs can cause permanent impotence and infertility. The claims are false. India's drug regulation authorities dismissed the claims as "absolute rubbish"; the World Health Organization (WHO) says there is no scientific evidence that Covid-19 vaccines cause impotence or infertility.

The post’s Hindi-language text translates to English as: “These doctors claim that if a person above 18-years of age gets Covid-19 vaccine, it can cause permanent impotence, and if that person gets married, girl or boy, they won’t be able to produce any children. We want vaccine manufacturing companies to give a guarantee and then all the unmarried people should take it, else not. People above 45 years of age who have taken the vaccine in India, at least 27 per cent have died.”

The post features images of some doctors in India who have expressed skepticism on social media about Covid-19 vaccines.

India expanded its vaccination programme in May 2021 to include all adults but many states have said they have insufficient stocks to meet demand, AFP reported.

Identical posts were also shared here and here on Facebook.

But the claims are all false.

VG Somani, chief of the Drug Authority of India, told reporters in January 2021 that the claims were "absolute rubbish".

“We'll never approve anything if there's slightest of safety concern,” he said.

“Vaccines are 110% safe. Some side effects like mild fever, pain & allergy are common for every vaccine. It is absolute rubbish”.

A clip of VG Somani speaking to reporters was published here by Indian news agency Asian News International on its official Twitter on January 3, 2021.

#WATCH I We'll never approve anything if there's slightest of safety concern. Vaccines are 110 % safe. Some side effects like mild fever, pain & allergy are common for every vaccine. It (that people may get impotent) is absolute rubbish: VG Somani,Drug Controller General of India pic.twitter.com/ZSQ8hU8gvw

The regional office of the WHO in South East Asia told AFP there is no scientific evidence that vaccines cause impotence or infertility.

Two vaccines have been approved by the Indian government -- Covaxin and Covishield -- as of May 7, 2021. Both have been approved as safe to use. Possible side effects include fatigue and nausea, according to the manufacturers, but not erectile dysfunction.

The misleading posts claim, without offering any evidence, that: "People above 45 years of age who have taken the vaccine in India, at least 27 per cent have died.”

According to the India’s health ministry, more than 160 million people have been vaccinated as of May 5, 2021. Initially, India only made vaccinations available to the people above the age group of 60 and frontline workers which included doctors, paramedics, municipal workers and armed forces.

Government statistics show that 180 people died after receiving the vaccine -- 0.0001125 percent of those vaccinated -- and there is no evidence the deaths were linked to the jab, according to this report.

In-depth case studies of some of the cases where people died after receiving the vaccination found "none of them were due to the Covid-19 vaccination," the health ministry has said.