The post’s Burmese-language caption translates to English as: “[Wives of the airmen] are going to be widows!.. Another chopper crashed down this evening. It crashed into a paddy field west of Dawthponeyan township. (4/5/2021-4:27PM).” 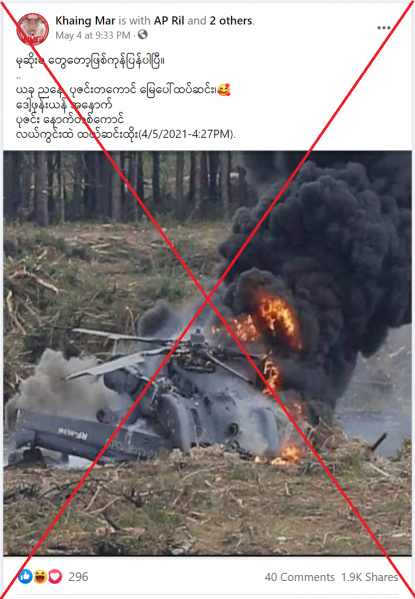 Dawthponeyan township is located in Kachin State in northern  Myanmar.

The photo circulated online one day after the Kachin Independence Army (KIA) claimed it had shot down a military helicopter on May 3, 2021, as AFP reported here.

The Kachin Independence Army is an ethnic armed group in Myanmar which has been attacked by the junta’s airstrikes in recent weeks.

The photo was also published alongside a similar claim on Facebook here, here, here, and here.

A reverse image search on Google found the photo has circulated online since August 2015 in reports about a helicopter crash at an airshow in Russia.

The photo was published by Reuters news agency here on August 2, 2015.

The photo caption reads in part: “A pilot stands near a burning Mi-28N from the Berkuty (Golden Eagles) helicopter display team after a hard touchdown during the 'Aviadarts' military aviation competition at the Dubrovichi range near Ryazan, Russia, August 2, 2015.

“The aircraft started dipping down due to back propeller failure and crashed, killing one of two pilots, according to a Reuters photographer and official representatives of the competition.”

AFP’s reporting on the Russian helicopter crash can be seen here.

Below is a screenshot comparison of the photo in the misleading posts (L) and the Reuters photo (R) :