In another video, US doctor spreads Covid-19 vaccine misinformation

Sherri Tenpenny, an American physician named among the biggest “profiteers” from anti-vaccination misinformation, appears on a YouTube channel sharing misleading claims about coronavirus shots. In a video viewed almost 100,000 times, she said they cause deaths, “transmit” side effects to the unvaccinated, and cause infertility risks. All of these claims are scientifically inaccurate, multiple experts have stated. 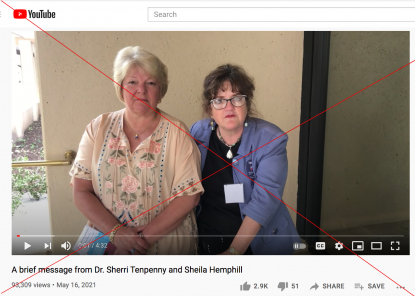 The video, shared on YouTube on May 16, 2021, has been viewed more than 93,000 times. It features Tenpenny, a licensed osteopath in Ohio, and Sheila Hemphill, founder of the anti-vaccine blog “Texas Right to Know.”

Tenpenny is a regular spreader of coronavirus misinformation whose claims AFP previously debunked.

A 2021 study from the Center for Countering Digital Hate (CCDH) found that she was among a dozen people responsible for 65 percent of anti-vaccine content on Facebook and Twitter. She also figured in a separate list of “Pandemic Profiteers” named in a subsequent CCDH report.

But despite this, Tenpenny was invited by Ohio’s Republican lawmakers to testify in favor of a bill that would prohibit mandatory vaccinations or vaccination status disclosure.

During that June 8, 2021 hearing, she relayed false information about Covid-19 inoculations and 5G, and what she said were the vaccines’ magnetic properties.

Her earlier appearance on the YouTube video continues to spread online.

AFP breaks down the list of claims she made.

Claim: Coronavirus vaccines can be transmitted from vaccinated to unvaccinated people, without close contact

Tenpenny starts the video by claiming that there is a “transmission, that we believe is the spike protein that has been created by these injections into people, it’s being transmitted to other people without close personal contact.” This causes health issues including abnormal bleeding and blood clots, among vaccinated people as well as those who have not been inoculated, she said.

mRNA vaccines, the most widely used in the US, differ from previously offered inoculations in that instead of confronting the immune system with part of a virus in a weakened or deactivated form to build antibodies, they give it a “blueprint” of a part of the virus (the spike protein) that the body can then recognize and fight when confronted by it later.

Drew Weissman, professor of medicine and mRNA researcher at the University of Pennsylvania’s Perelman School of Medicine, dismissed the notion of spike protein transmission.

He told AFP on June 10, 2021: “The spike protein made by the vaccine cannot be transmitted to another. It is utterly impossible. The protein is found in lymphoid organs and at very small levels in the circulation. There is no way for this protein to be released.”

In a previous fact-check published in April 2021, Dasantila Golemi-Kotra, a microbiologist at York University, explained to AFP that no spike protein gets shed during inoculation and it “cannot infect someone else.”

She said: “If it is digested it will be destroyed by the low pH in our stomach and the enzymes there,” and if it gets stuck in the skin or enters the mouth or the eyes or nose, “it is very likely to be digested by the enzymes secreted by our cells on these environments.”

Claim: Thousands of people have been killed by the vaccine

In the video, Tenpenny claims that “thousands of people” have been “killed by these shots,” and calls the coronavirus vaccines “deadly weapons.”

“In five months, it has killed more than 4,000 people that we know of… That’s an FDA database number, monitored by the FDA, collected by the CDC. Those are government numbers,” she said.

This is a reference to the Vaccine Adverse Event Reporting System (VAERS), run by the CDC and Food and Drug Administration. VAERS has been the subject of recurrent online misinformation.

As seen on the CDC’s webpage, the number mentioned by Tenpenny is of deaths following vaccination, not fatalities proven to be caused by a vaccine.

“A review of available clinical information, including death certificates, autopsy, and medical records has not established a causal link to Covid-19 vaccines,” the CDC says on its page.

However, it adds that “recent reports indicate a plausible causal relationship between the J&J/Janssen Covid-19 vaccine and a rare and serious adverse event -- blood clots with low platelets -- which has caused deaths.”

Administration of the single-dose Johnson & Johnson vaccine, which uses a technology different from the mRNA shots, was paused due to the rare blood clot issue, but subsequently resumed following a recommendation by the CDC and FDA.

Susan Ellenberg, professor of biostatistics, medical ethics and health policy at the University of Pennsylvania’s Perelman School of Medicine explains that the VAERS’ deaths reports “represent only events that happened after vaccination, without any evidence of a causal effect.”

“Vaccines are designed to prevent one thing--they won’t prevent any bad thing that might happen to someone,” she also told AFP on June 10.

Tenpenny says: “I talked to a physician last night who works in an urgent care, and she said she’s getting 30 to 35 men per week coming into her urgent care talking about testicular swelling and lack of being able to maintain an erection after getting their shots.”

On June 10, Taison Bell, a critical care and infectious disease physician at the University of Virginia, said by phone: “This connection with male fertility is just not true in the long term. I have seen a couple of studies showing that if a man has a high fever associated with the vaccine, there can be a temporary drop of sperm count but that comes right back.”

A joint statement on the American Society for Reproductive Medicine (ASRM) website makes a similar observation. “Fevers can cause temporary declines in sperm production. Thus, if a man experiences fever as the result of the Covid-19 vaccine, he may experience a temporary decline in sperm production, but that would be similar to or less than if the individual experienced fever from developing Covid-19 or for other reasons.”

In the US, more than 305 million Covid-19 shots have been administered. Although the rate of new infections is declining, misinformation about vaccines continues to spread, threatening vaccine uptake.