Three photos have been shared hundreds of times in multiple posts on Facebook, Instagram and Twitter, along with a claim that they show tens of thousands of people rallied in Indonesia in support of Palestinians in May 2021. The claim is false. While hundreds of Indonesians protested in Jakarta in May to show solidarity with Palestinians, the photos actually show two different protests in Indonesia in 2017 and 2016.

The three photos were posted on May 18, 2021, on Facebook here, where they have been shared more than 200 times.

The caption reads: “Tens of thousands - a massive demonstration in Indonesia to express solidarity with the Palestinians in #SheikhJarrah and #Gaza Strip. #GazaUnderAttack”. 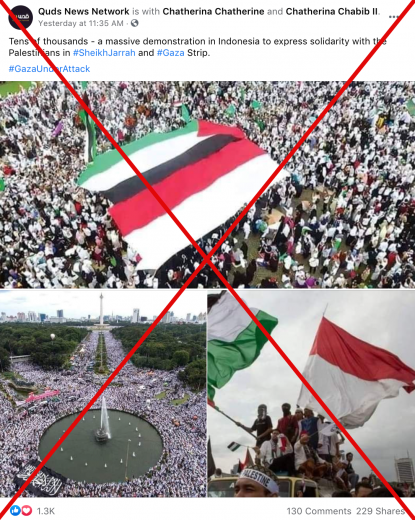 Hundreds of Indonesians protested in front of the US embassy in Jakarta on May 18, 2021, to show solidarity with Palestinians and demand an end to Israeli airstrikes in the Gaza Strip, as reported by state news agency Antara and the Jakarta Globe.

The photos have been shared more than 1,000 times after it was posted with a similar claim on Facebook here, on Instagram here, and on Twitter here and here.

The claim, however, is false. Two of the photos were taken in December 2017, when Indonesians protested former US President Donald Trump’s decision to recognise Jerusalem as the Israeli capital. Another photo was taken during a 2016 protest against the then Jakarta governor who was accused of blasphemy.

The video, published on the website of its affiliated online media Medcom.id, is titled: “Religious Affairs Minister Lukman and Governor Anies Joins Action to Defend Palestine at the National Monument.”

The Indonesian-language report reads: “A number of public figures, such as Religious Affairs Minister Lukman Hakim Saifuddin and Jakarta Governor Anies Baswedan, join the solidarity action to defend Palestine at the National Monument. This action is to oppose the US claim that Jerusalem is the capital of Israel.”

The National Monument is located in Jakarta.

Then US President Donald Trump announced recognised the disputed city of Jerusalem as Israel’s capital on December 6, 2017, overturning decades of US policy, AFP reported here.

Tens of thousands of people took part in the December 17, 2017, rally in Jakarta, which was organised by the Indonesian Ulema Council and supported by the government and several other Islamic organisations, AFP reported here.

The scene that shows a giant Palestinian flag among the massive crowd can be seen in the thumbnail and from the 1:11 to 1:56 mark of the Metro TV video.

Below is a screenshot comparison of the first photo in the misleading post (L) and the Metro TV video (R):

A reverse image search on TinEye found the second photo was published here, on the website of Getty Images, and it was dated December 17, 2017.

The photo’s caption reads: “Indonesian men wave Palestinian and Indonesian flags at a large demonstration against the United States' decision to recognize Jerusalem as the Capital of Israel on December 17, 2017 in Jakarta, Indonesia. The demonstrators whose number police estimated at 80,000 called for Boycotts of American and Israeli businesses.”

Below is a screenshot comparison of the second photo in the misleading post (L) and the Getty Images photo (R):

A reverse image search on Microsoft Bing found the third photo appeared in this December 3, 2016, report by The Jakarta Post, an English-language newspaper in Indonesia.

The photo, credited to Antara news agency, has a caption that reads: “Protesters’ mecca: Muslims gather near the National Monument in Jakarta on Friday as they rally against Jakarta Governor Basuki ‘Ahok’ Tjahaja Purnama, whom the police have named a blasphemy suspect.”

More than 200,000 Muslims rallied in Jakarta on December 2, 2016, to demand the Chinese Christian governor of the Indonesian capital, Basuki Tjahaja Purnama, popularly known as Ahok, be arrested for insulting Islam, AFP reported here.

Below is a screenshot comparison of the third photo in the misleading post (L) and The Jakarta Post report (R):