An image of people praying in the street has been shared in multiple Facebook and Twitter posts alongside a claim it shows Palestinian Muslims attending Friday prayers. The photo circulated online as the Israel-Palestinian conflict escalated. The image has been shared in a false context: it actually shows Muslims praying in Indian-administered Kashmir in 2016.

Screenshot of the photo claiming to show Muslims in Palestine taken on May 19, 2021.

The Kashmir region has been a flashpoint for conflict between Pakistan and India since 1947.

The photo circulated online after violence escalated between Israel and armed groups in the Gaza Strip. AFP reported on the crisis here.

Below is a comparison of the photo in the misleading posts (L) and the one published by Punjab Kesari (R):

Screenshot comparing the photo falsely claiming to show Palestinian Muslims (L) with the one from Punjab Kesari (R). Taken on May 19, 2021.

The article states the image shows “youths who joined the prayer ceremony of the six terrorists killed in Lolab and Baramulla in Kupwara district...with stones in their hands”. 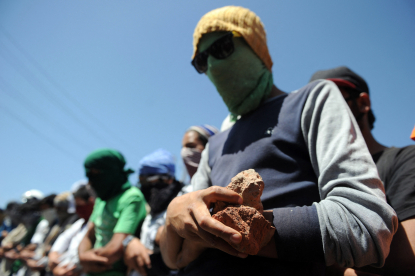 A kashmiri hodded protestor holds stones in his hand during clashes in downtown Srinagar on June 24, 2016 (Photo by Tauseef Mustafa / AFP)

According to the caption, the photo shows kashmiri protesters demonstrating against Indian rule of the disputed region.

AFP reported on the clashes here.