Seven pictures have been shared thousands of times in Facebook posts that claim they show Mindat town in Myanmar’s western Chin State after deadly clashes between the Myanmar military and anti-coup rebels in May 2021. The claim is false. The images in the misleading posts are actually 2013 photographs of conflict in central Myanmar that were taken by AFP and Reuters news agency. 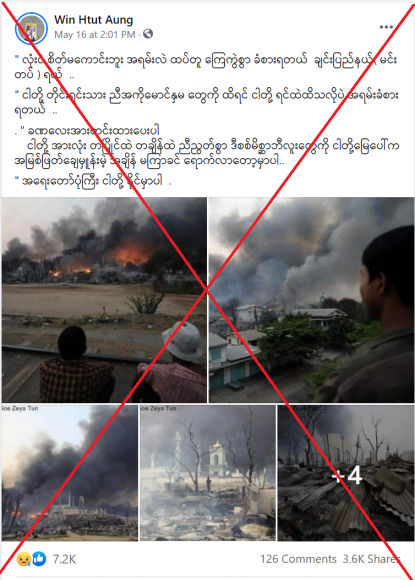 The post’s Burmese-language caption translates to English as: “Very sorry, Mindat (Chin State). If our ethnic brothers and sisters are hit, it feels the same in our hearts. Hold on tight for a moment. The time that we all are united, and eradicate these war demons will come soon. We will win the revolution.”

Mindat is located in Chin State of Western Myanmar. Mindat became a hotspot after days of clashes between the Myanmar army and anti-coup rebels, as AFP reported here.

Another user wrote: “May God bless Mindat, my heart is so sad to see these things. How they [the security forces] are cruel to people.”

The photos were also published alongside similar misleading claims on Facebook here, here, and here.

A Google reverse image search found the pictures actually show a communal riot that happened in Meiktila in central Myanmar in 2013.

The photos were published by AFP and Reuters news agency.

Here is an AFP report about the riot attack in Meiktila in 2013.

A Google reverse image search found the first and second images were published by AFP here and here on March 21, 2013.

Both of the photos say the images show residents watching buildings burn in riot-hit Meiktila, central Myanmar on March 21, 2013.

Both captions say: “ At least 10 people have been killed in riots in central Myanmar, an MP said on March 21, prompting international concern at the country's worst communal unrest since a wave of Buddhist-Muslim clashes last year. AFP PHOTO/ Soe Than WIN”.

Below is a screenshot comparison of the photos in the misleading posts (L) and AFP’s photos (R): 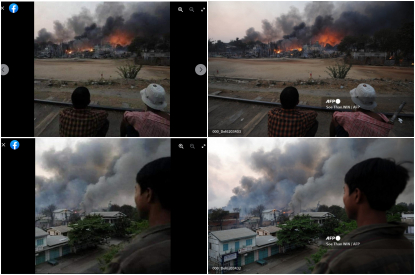 The photos also show buildings burning during the riot in Meiktila in 2013.

The captions read in part: “The central Myanmar town declared a curfew for a second night on Thursday after clashes killed 10 people, including a Buddhist monk, and injured at least 20, authorities said. Riots erupted in Meikhtila, 540 km (336 miles) north of Yangon, on Wednesday after an argument between a Buddhist couple and the Muslim owners of a gold shop escalated into a riot involving hundreds of people, police said. REUTERS/Soe Zeya Tun (MYANMAR - Tags: CIVIL UNREST RELIGION TPX IMAGES OF THE DAY)".

Below is a screenshot comparison of the photos in the misleading posts (L) and the Reuters’ photos (R) : 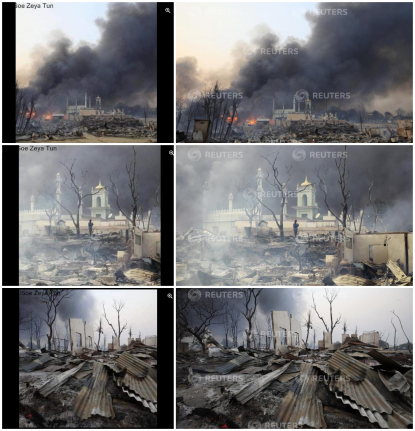 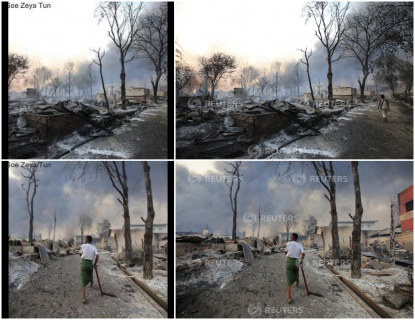