An American scientist claims that Covid-19 vaccines pose safety concerns, including sterilization and changes to DNA, in remarks shared on social media. But experts and public health bodies say there is no evidence that mRNA shots are causing reproductive problems, and are not modifying the genes of recipients.

“Molecular Biologist Dr. Janci Chunn Lindsay: ‘We could be Sterilizing an Entire Generation,’” warns the title of a Bitchute video viewed more than 8,000 times.

It includes audio and a transcript of remarks made during the April 23, 2021 public comments section during a meeting of the US Centers for Disease Control and Prevention (CDC) Advisory Committee on Immunization Practices (ACIP) by Dr Janci Chunn Lindsay, who confirmed to AFP she was the speaker.

She says she feels strongly that the inoculations “must be halted immediately due to safety concerns on several fronts.” 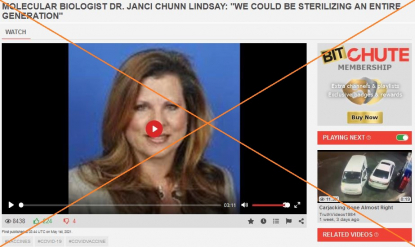 Screenshot taken from bitchute.com on May 11, 2021

Posts sharing the speech can be found across social media, and a transcript has been shared more than 2,000 times on Facebook, according to the social media monitoring tool CrowdTangle.

Countries around the world are seeking to immunize their populations against Covid-19, which has killed more than 3.3 million people. But inaccurate claims about the vaccines are spreading across the internet, despite efforts by social media companies to stop them and assurances from health authorities that the shots are safe and effective.

More than 261 million Covid-19 vaccine doses have been administered in the United States. Most were Pfizer’s and Moderna’s mRNA vaccines, though a shot from Johnson & Johnson that uses different technology is also being used.

Below, AFP Fact Check breaks down some of the claims made in the video.

Claim: Covid-19 vaccines will ‘cross-react’ and cause reproductive problems

Lindsay claims that “there is credible reason to believe that the (Covid vaccines) will cross-react with the syncytin and reproductive proteins in sperm, ova, and placenta, and lead to impaired fertility and reproductive outcomes.”

But there is no evidence that they do, according to multiple experts.

Syncytin-1 is a protein essential for placental formation.

The mRNA vaccines developed by Pfizer-BioNTech and Moderna differ from previously administered inoculations. Instead of confronting the immune system with part of a virus in a weakened or deactivated form to build antibodies, they give it a “blueprint” of a part of the virus (the spike protein) that the body can then recognize and fight when confronted by it later.

The CDC says that “there is currently no evidence that any vaccines, including Covid-19 vaccines, cause fertility problems.”

In a joint statement, the American College of Obstetricians and Gynecologists, the American Society for Reproductive Medicine and the Society for Maternal-Fetal Medicine also said that “there is no evidence that the vaccine can lead to loss of fertility.”

While fertility was not specifically studied in clinical trials of the vaccines, the statement explains that “no loss of fertility has been reported among trial participants or among the millions who have received the vaccines since their authorization, and no signs of infertility appeared in animal studies. Loss of fertility is scientifically unlikely.”

Dasantila Golemi-Kotra, a microbiologist at York University, told AFP that “vaccine-induced antibodies against SARS-CoV-2 spike protein are unlikely to cross-react with the syncytin-1 or -2 in the body and lead to infertility.”

She explained that the misinformation may stem from the fact that the anti-spike protein antibodies and the syncytin-1 protein of the placenta share a “very short amino acid region.”

But this does not mean that the immune system would attack the syncytin protein. The immune system can “recognize a surface in their target protein, which rarely is confined to a single short amino acid sequence,” she said.

“It has been incorrectly suggested that Covid-19 vaccines will cause infertility because of a very short amino acid sequence in the spike protein of SARS-CoV-2 virus that is shared with the placental protein, syncytin-1,” she said.

The sequence shares just four amino acids and is therefore too short to “plausibly give rise to autoimmunity,” or prompting the body’s immune system to attack its own cells, Keane said.

This Twitter thread from immunologist Andrew Croxford shows that other proteins in the human body also share short amino acid sequences with the SARS-CoV-2 spike protein, without inducing an autoimmune response.

Annette Beck-Sickinger, professor at the University of Leipzig, agreed, explaining that “if this syncytin claim was true, every woman who has been previously infected with Covid-19 would consequently be infertile, but this is not the case.”

Lindsay claims that as of early April, “we have seen 100 pregnancy losses,” and “we have heard multiple reports of menses irregularities in those vaccinated.”

But there is no current indication that Covid-19 vaccines negatively affect women’s pregnancies, according to experts and public health bodies.

The CDC said in February that it had not identified any trends of miscarriages following Covid-19 immunization.

“To date, no evidence has indicated an increase in miscarriages after Covid-19 vaccines, and no concerning patterns of reporting have been observed,” a spokesperson said.

The CDC also states on its website that “based on how these vaccines work in the body, experts believe they are unlikely to pose a specific risk for people who are pregnant.”

Preliminary findings from a study published in April 2021 in The New England Journal of Medicine “did not show obvious safety signals among pregnant persons who received mRNA Covid-19 vaccines,” according to its authors.

The study tracked participants via the CDC’s V-safe app, which prompts people to self-report adverse events following vaccination. It found that from 827 completed pregnancies, 712 resulted in live births, while 115 (13.9 percent) were lost.

According to the Mayo Clinic, miscarriage “is a relatively common experience” and occurs in about 10-20 percent of known pregnancies, often when the fetus is not developing normally.

A March 2021 Nature Reviews Immunology article examining the safety of vaccines for pregnant women explains that while they were excluded from the clinical trial for the vaccines and women participating were advised not to become pregnant, a small number did. Their pregnancies were not negatively affected compared to the pregnancies that occurred in the control group.

Results from the limited subset show that “there was no significant difference in the rate of accidental pregnancies in the vaccinated groups compared with the control groups, which indicates that the vaccines do not prevent pregnancy in humans,” the article said.
“Similarly, the miscarriage rates are comparable between the groups, indicating no detrimental effect of vaccination on early pregnancy.”

In February 2021, Pfizer-BioNTech started a study to specifically assess the safety of its vaccine in pregnant women.

Research is underway to determine if there is a causal relationship between the two. Some experts suggest that the added stress of the pandemic could play a part in cases in which women experienced menstrual changes.

Kathryn Clancy, associate professor in the Department of Anthropology at the University of Illinois Urbana-Champaign, is leading research on the possible causal links between Covid-19 vaccines and menstrual cycle changes.

She previously said that multiple biological mechanisms might underlie menstrual changes with vaccination. “These are related to changes in platelets, inflammatory processes, and vasodilation, all normal immune activation responses that you want to see with vaccination.”

“So menstrual changes are not concerning, but rather short-term side effects that are similar to sore arm, fatigue, fever,” she added.

Claim: Reported blood clots were caused by the Covid-19 vaccines

The scientist goes on to claim that “all of the gene therapies (Covid-19 vaccines) are causing coagulopathy,” as purportedly demonstrated by hundreds of reports related to blood clotting disorders in the US Vaccine Adverse Events Reporting System (VAERS).

Reports appearing in VAERS alone “cannot be used to determine if a vaccine caused or contributed to an adverse event or illness,” says a disclaimer that users must indicate they have read and understood before accessing the system’s data.

An official description of VAERS, which is run by the CDC and the US Food and Drug Administration (FDA), says it “contains information on unverified reports of adverse events (illnesses, health problems and/or symptoms) following immunization with US-licensed vaccines,” and that it accepts reports “from anyone.”

There have been reports of blood clots associated with low platelets following vaccination with the adenoviral (non-mRNA) vaccines from Johnson&Johnson/Janssen and Oxford/AstraZeneca, but these events are very rare.

The US paused delivery of the Johnson&Johnson shots because of blood clot concerns, but the CDC and FDA recommended they resume after data showed 23 confirmed reports of thrombocytopenia syndrome (TTS), which involves blood clots with low platelets, out of more than 8.4 million doses administered.

Several European countries also halted distribution of the Oxford/AstraZeneca vaccine, which uses a similar technology to the J&J shot, after reports of blood clots following vaccination.

The vaccine, which has not yet been authorized in the United States but is in Canada, was then reviewed by the European Medicines Agency (EMA).

Like the CDC, the EMA concluded that “the benefits of the vaccine in combating the still widespread threat of Covid-19 (which itself results in clotting problems and may be fatal) continue to outweigh the risk of side effects.”

The EMA said it was monitoring whether mRNA vaccines from Pfizer and Moderna could be linked to rare cases of blood clotting, but there was no indication so far.