A graphic attributed to Philippine broadcaster ABS-CBN that features a purported quote from Philippine President Rodrigo Duterte has been shared in multiple posts on Facebook and Twitter. The graphic claims that Duterte said he will “punch” Filipino boxer-politician Manny Pacquiao because Pacquiao criticized his response to China over disputes in the South China Sea. But the claim is false: the news graphic from ABS-CBN has been doctored to include Pacquiao’s name; Duterte’s original quote was about a former diplomat, according to a transcript of the president’s speech.

It shows a photo of President Duterte beside Tagalog-language text that purports to be a quote from the leader. It reads in English as:

“This Manny Pacquiao blames me [for not fighting for our territorial rights in the South China Sea]. I’ll punch you when I see you. You’re insane! /PRESIDENT RODRIGO DUTERTE / On the former welterweight champion of the world’s insistence that Duterte is not doing enough to assert PH’s territorial rights vs China / May 3, 2021”.

The graphic also shows an attribution to Philippine broadcaster ABS-CBN with its logos seen at the bottom.

The post’s caption translates in part as: “This is a good fight [shitty diehard Duterte supporters], ‘[sex] Maniac vs [Fuck You]’”. 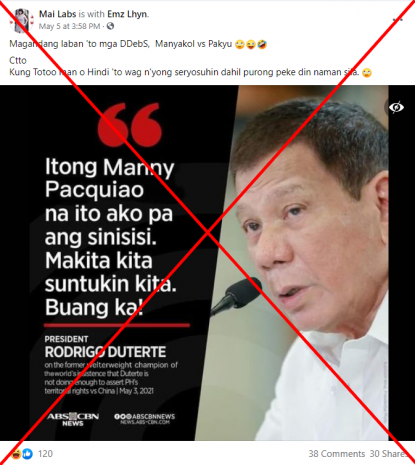 (Screenshot of post with doctored news graphic taken on May 7, 2021)

The graphic circulated after world boxing champion and elected senator Manny Pacquiao said in a May 1, 2021 media interview that he found President Duterte’s pronouncements on China’s recent military activities in the South China Sea wanting, compared to his position while still campaigning for president in 2016.

However, the claim is false. The graphic has been doctored to include Pacquiao’s name in comments Duterte made about former diplomat Albert del Rosario.

It shows that the misleading graphic altered the graphic: the name “Albert [del Rosario]” was changed to “Manny Pacquiao”, and the phrase “...foreign affairs secretary’s...” was changed to “...welterweight champion of the world’s...”.

Below is a screenshot comparison of the doctored graphic (L) and the original image from ABS-CBN (R): 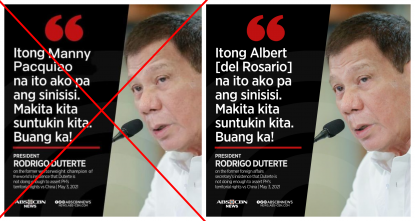 Albert del Rosario refers to the Philippines’ chief diplomat during a two-month military standoff between Beijing and Manila in 2012 over Scarborough Shoal in the South China Sea. He wrote an open letter on May 2, 2021 saying President Duterte must “defend what is ours”.

A review of Duterte’s televised address on May 3, 2021 shows it was del Rosario’s name which the president mentioned in that quote. The leader lambasted the former diplomat’s response to China during his predecessor’s term. Senator Pacquiao was never mentioned by the president.

ABS-CBN also posted a “disinformation alert” on May 5, 2021, and labelled the doctored graphic as “fake”.