Skip to main content
Pfizer CEO Albert Bourla addresses a press conference after a visit to oversee production of the Pfizer-BioNTech Covid-19 vaccine at a Pfizer factory in Puurs, Belgium on April 23, 2021 ( POOL / JOHN THYS)

Social media posts shared thousands of times in August 2021 link to an Israeli newspaper article to claim that the head of Pfizer, which manufactures the most widely-used shot against Covid-19 in the US, is not fully vaccinated. But the article is dated before the pharmaceutical chief received his second jab, on March 10, 2021, and his company confirmed that he has received the full complement of shots.

"The CEO of Pfizer had to cancel a planned trip to Israel because he was not fully vaccinated," Newsmax correspondent Emerald Robinson wrote in an August 5, 2021 tweet shared around 13,000 times.

"Let me repeat: BECAUSE HE WAS NOT VACCINATED," she added, above a link to a Jerusalem Post article entitled "Pfizer CEO's Israel visit canceled because he is not fully vaccinated." 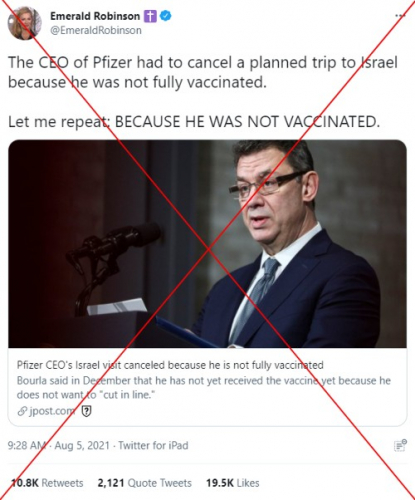 Similar headlines were shared on Facebook, Instagram, or in online articles, including in Spanish and in Portuguese.

"So he don't even believe in his own product," one Instagram user wrote, feeding into widespread online misinformation questioning the safety and effectiveness of the vaccines.

However, the posts mislead by relying on obsolete information.

The Jerusalem Post article shared as a link by Robinson, and as a screenshot by an Instagram user, is from March 7, 2021.

Bourla, in contact with with former Israeli prime minister Benjamin Netanyahu, was supposed to visit the Jewish state that month with a delegation, but postponed it because he had not received the second dose of the vaccine yet, according to Israeli news organization N12.

Bourla said in an interview on US channel CNBC in December 2020 that he did not want to be seen as "cutting the line" and preferred to wait for his age group's turn.

However, Bourla announced that he had received his second dose on March 10, 2021, in a tweet showing a photo of him getting the jab.

Excited to receive my 2nd dose of the Pfizer/BioNTech #COVID19 vaccine. There's nothing I want more than for my loved ones and people around the world to have the same opportunity. Although the journey is far from over, we are working tirelessly to beat the virus. pic.twitter.com/ES05WPBLJA

There is no evidence that Bourla went to Israel between March and August 2021 after all. He did travel internationally at least twice, to Belgium in April, and England in June.

Robinson specified in an "update" tweet that Bourla is indeed fully vaccinated, but did not delete the original tweet.

Newsmax is a TV news channel and online website that AFP debunked in the past.

The Covid-19 vaccines available in the United States, including the one developed by Pfizer with German firm BioNTech, are safe and effective, according to the Centers for Disease Control and Prevention. The German company announced on August 9 that its product works against variants such as the Delta strain.